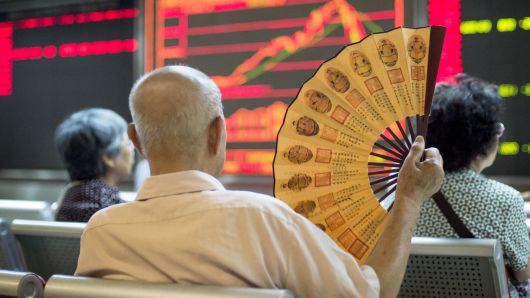 One of the world’s biggest indexers is adding more mainland China stocks to its offerings on Friday.
This comes as trade tensions rock Chinese markets and should give them a boost from foreign investors.
MSCI is slowly increasing the number and weighting of China stocks in its indexes to avoid roiling markets.

Despite global trade and tariff tensions, one of the world’s biggest indexers is pushing ahead with plans to include mainland China stocks in its indexes. That means investors in most global funds will be owning more China stocks in the next few years.

It couldn’t come at a better time for China. The trade wars have been brutal on the country’s stock market, with the Shanghai exchange, the nation’s largest, down 17 percent in 2018. China’s stock market boosters would love the additional investment from foreign investors to help them in a difficult year.

“The mainland China stock market is mostly owned by retail investors, so it is very driven by sentiment,” said Brendan Ahern, who runs the KraneShares MSCI China A Shares ETF, a basket of mainland China stocks (known as “A Shares”). “Those retail investors are really worried about trade wars, so this foreign investment will help institutionalize the market and slowly make it more dominated by professional investors.”

MSCI on Friday initiates the second leg of its multiyear plan to incorporate China mainland stocks into its global stock indexing system. Active and passive managers use MSCI to determine their investment universe. Many index funds and ETFs are directly benchmarked to MSCI indexes. The widely followed indexes are used as benchmarks for many global ETFs and mutual funds, including the Emerging Markets ETF and the iShares MSCI All World ETF.

At the close of the market, indexers are going to have to buy mainland China stocks and sell those from other parts of the world.

In June, the first leg began with the addition of 226 mainland China stocks into MSCI indexes

To avoid roiling markets, MSCI is proceeding slowly. The first addition weighted the 226 stocks by only 2.5 percent of their market cap. The second addition increases the number of stocks by 10 and adds 2.5 percent, to a total of 5 percent of market capitalization.

What this means: If a stock has a market capitalization of $100 million, it’s weighting in the indexes will only be at 5 percent of that value, or $5 million. That weighting will likely slowly increase in the next three to five years.

China is already well represented in these indexes because Hong Kong-listed stocks, as well as China stocks that trade in the United States. (Alibaba, JD.com), are already included. As a result, China is already more than 30 percent of the weighting in the Emerging Market Index, and that weighting will increase slightly Friday night.

Here is what the MSCI Emerging Market Index will look like after the new inclusion of A Shares:

That 0.8 percent weighting doesn’t seem like much, but it will grow rapidly. In the event of full inclusion of China A Shares (100 percent weighting), which is likely to happen in the next three to five years, China equities as a whole will be almost 40 percent of the Emerging Market Index.

“What this means is that if you are an investor that owns any kind of international fund, any kind of ETF or mutual fund that is indexed to the global markets, you are going to be owning a lot more China stocks in the next few years,” Ahern told me.

More importantly, as China grows, the weighting of other parts of the world will be getting smaller.

“Latin America becomes a rounding error,” Ahern said. “It’s already small, and it’s going to get smaller. China and its capital markets are just massive compared to the rest of the world.”

Are Stocks a Better Investment Than Real Estate?