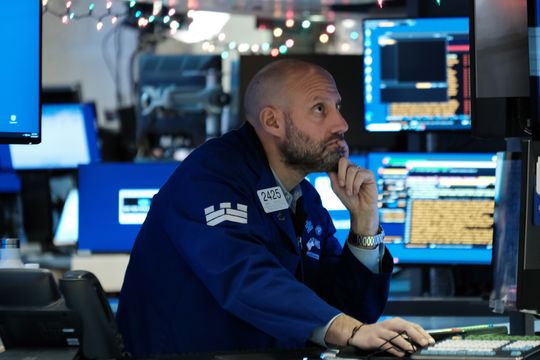 Friday is shaping up to be a doozy of a session on Wall Street, capping what has been a stomach-churning ride in markets over the past few weeks.

The U.S. stock market’s Friday action seems particularly frenetic, and experts say that investors can attribute at least a part of the session’s moves to one novel factor: quadruple witching.

“This is the classic definition of volatility; big swings in both directions,” Randy Frederick, managing director trading and derivatives at Charles Schwab & Co., told MarketWatch on Friday.

Quadruple witching, occurs on the third Friday of the month of every quarter, in March, June, September, and December, and refers to the simultaneous expiration of single-stock options, single-stock futures, and stock-index options and stock-futures.

On Friday, the Dow Jones Industrial Average DJIA, -1.48% traded at a low of 35,284, down 1.7% or 613 points, until paring losses in afternoon trade. The decline for the blue-chip index at its least severe on Friday intraday was down by 98 points.

Equity markets have been experiencing gyrations since the Federal Reserve on Wednesday confirmed plans step up the pace of reducing market-supportive accommodations by tapering bond purchases at a more accelerated rate. On top of that, the central bank’s projections for interest rates point to three quarter-of-a-percentage-point increases in benchmark federal funds rates, which currently stand at a range between 0% and 0.25%.

Frederick said that amplifying the moves is concerns about “high interest rates,” and the battle playing out between those positioning for a higher interest-rate environment and those “who are worried about high inflation.”

National’s Hogan emphasized that usually quad witching isn’t as much of a factor but the volume of contract expirations, which was at a 10-year high, also was contributing to the outsize swings.

“Quad-witching days are always volatile, but this one also has the accompaniment of investors rerating long duration growth names for the rising rate environment,” he said.

Hogan added that concerns about the path of the omicron variant of the coronavirus that causes COVID-19 also was intensifying rotational shifts and increase volatility.’

Indeed, President Joe Biden on Thursday warned that hospitals could be overwhelmed, as the omicron variant spreads rapidly across the U.S., declaring the potential for a “winter of severe illness and death,” speaking at a White House briefing. The progress of the illness has raised some doubts about the economy and the reaction of central banks to the persistent pandemic.

Usually, the settlement of contracts on quad witching tend to lead to outsize volumes on the day but particularly in the open and close, analysts and traders have said.

History indicates that quad witching days haven’t been good for the S&P 500, at least for the bulls. But the declines have been modest. Over the past 10 years, the S&P 500 has declined 0.28% on the day.

Frederick notes that the S&P 500 has declined in each of the past four quad witching occurrences.

That said, moves in the Cboe Volatility Index VIX, +4.86%, or VIX, were relatively subdued, considering the market’s intraday ructions. The VIX, which is used to express market expectations for moves in the S&P 500 in the coming 30-day period, was up by around 1%. The index tends to move inversely with stock moves.

The 10-year Treasury note yield TMUBMUSD10Y, 1.407%, however was hanging around 1.41% and had hit a low around 1.37%, according to FactSet. The moves imply that investors may be harboring some concerns about the longer-term outlook for the market and the economy as the country attempts to navigate the pandemic headed into 2022.