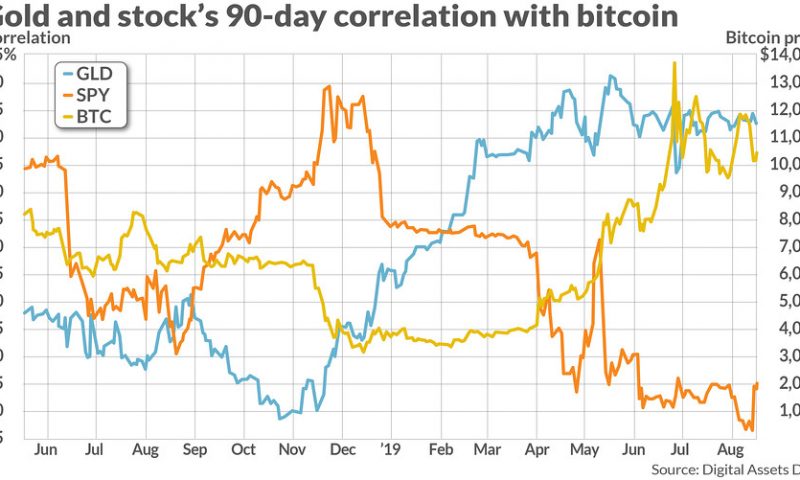 The world’s No. 1 cryptocurrency, bitcoin, has enjoyed a very loose relationship with other assets during its brief history, but that could be changing, a recent chart shows.

A report from Digital Asset Data illustrates (chart attached) that over the past three months, bitcoin has moved in tandem with gold and has swung inversely to moves in the stock market.

In this case, Digital Asset researched the return for gold prices GC.1, -0.72%, the SPDR S&P 500 ETF Trust SPY, +0.04%, a popular exchange-traded fund against bitcoin over a rolling 90-day period. The report shows that as the S&P 500 has skidded lower, bitcoin and gold have gained.

To be sure, the correlation may not be statistically significant but Digital Asset makes the case that it is evidence of a maturing view of bitcoin as a store of value along with gold.

“The findings tend to signal that Bitcoin is starting to behave more like a store of value and is potentially being used as a safe-haven asset during global uncertainty in traditional markets,” Ryan Alfred, president of Digital Assets Data in a statement.

Bitcoin enthusiasts have mostly positioned the crypto as an asset that is the most uncorrelated against others and therefore is being perceived as a good alternative to traditional securities.

Bitcoin is still widely viewed as an unconventional holding but experimentation with blockchain, the technology that underpins most digital assets, by traditional companies has garnered bitcoin and its ilk greater attention and legitimacy.

Facebook’s attempt to rollout Libra coin, a cryptocurrency aimed at facilitating global payments and JPMorgan Chase & Co.’s JPM, +0.75% JPM coin, a digital asset intended to address settlements in the banking industry are often cited as recognition of the natural evolution of cryptocurrency toward a genuine purpose.

Oct. 31 marked the 10th birthday of one of bitcoin, created back in 2009 by a person or persons known as Satoshi Nakamoto, resulting in one of the more divisive technological advancements of the 21st century.