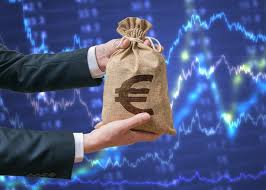 This week’s headline risk comes courtesy of our friends at the ECB. On Wednesday, Bloomberg reported that “The European Central Bank is set to tweak its forecasts lower for euro-area economic growth as global trade tensions damp external demand …”

Their sources were accurate, as the ECB did just that on Thursday when it released its newest projections, lowering growth estimates once again.

This round of forecast revisions began in June when the ECB lowered its March forecast of +2.4% down to +2.1%. Now three months later, it’s revising it down to 2.0%.

We’ve been discussing slowing eurozone growth (specifically in Germany) internally since December and publicly since March. The arrival of the ECB to the growth slowing party six months after us is not a surprise.

If you understand nothing else about central bankers, know this: these guys are always a day (or six months) late and a dollar (or euro) short.

The ECB is expected to completely end its asset purchases in December, and Draghi’s comments on Thursday show that it is still of this mindsight. We called our eurozone slowing macro theme “Draghi’s Dilemma” because the fact that eurozone growth has been slowing makes that policy decision murkier than it was in 2017 when eurozone growth was accelerating at the fastest pace in five years.

Based on Thursday’s ECB release it appears that the ECB isn’t at all concerned with the trajectory of growth, and instead is driving policy decisions based on inflation. Super Mario gave a head nod to growth by saying that economic expansion is “still solid.”

Man, this guy really doesn’t understand macro. The most important aspect of any economic data series is what happens at the margin, or the slope of the economic data. Well, the slope of eurozone annual GDP growth has been slowing for three consecutive quarters.

On inflation, Draghi spoke out of both sides of his mouth, saying that “uncertainty around the inflation outlook is receding,” then acknowledging that “measures of underlying inflation remain generally muted.”

Eurozone inflation only recently hit the 2% target, and it has been five years since inflation remained at (or above) that threshold for a prolonged period. Clearly, inflation is not in danger of running away from the ECB and shouldn’t be the primary driver of policy decisions.

The one thing we know for sure is that if the ECB tightens policy, through rhetoric or by ending asset purchases, it will draw the next eurozone recession closer.

The eurozone economy is now firmly entrenched in a Fundamental Gravity #3 environment, which is why equity markets have been marching their way to crash mode. The year-to-date drawdowns have been EM-like for German equities (-16.7), Spanish equities (-18.9%) and Italian equities (-20.3%).

The eurozone is likely headed toward a Fundamental Gravity #4 as the final quarter of the year arrives, which is why we will continue to focus on opportunities to short eurozone equities.

In the October 1 edition of Gravitational Edge, we will update our Draghi’s Dilemma macro theme and dive deep into Fundamental, Quantitative and Behavioral Gravity developments over the last six weeks.

US equities were resilient to trade wars – ANZ

How to navigate the complexity of claiming Social Security