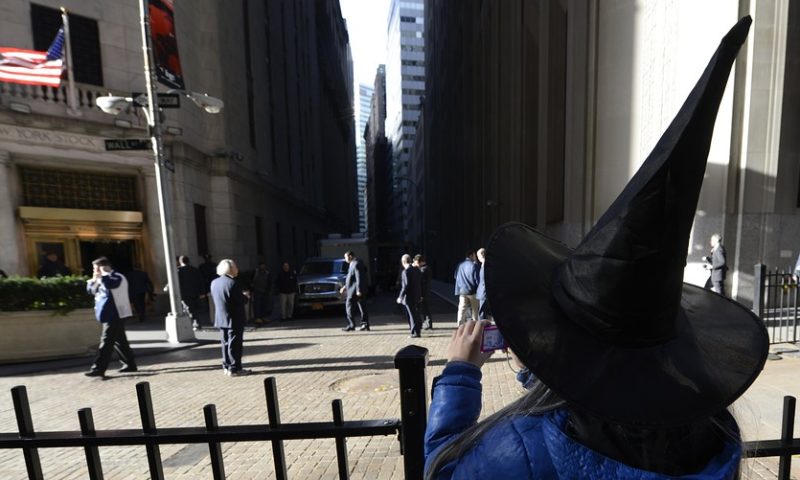 Are stock-market returns better if you invest at this time of year?

SALEM, MASS. — Where better to explore the connection between witchcraft and Wall Street than this spooky old New England town? It’s been linked to the occult since the witch trials of the 1690s, and now hosts so many psychics, mystics and fortune-tellers that they are licensed and regulated by city ordinance.

Salem is to Halloween as New Orleans is to Mardi Gras. The witches, ghosts and ghouls will be out in force this week. During my recent visit, I took Warren Buffett’s advice, and sought stock advice from a genuine, bona fide fortune-teller (more on that below).

But first: About Wall Street and witchcraft. And no, this is not a trick.

It sounds like something out of a ghost story or a fairy tale. But Halloween, the night of the dead, isn’t just the best time of year for goblins and warlocks.

It’s also the best time of year to put your money into the stock market.

Nobody knows why, but a creepily simple way to earn superior long-term stock-market returns throughout history has been to invest in stocks on All Hallow’s Eve — Oct. 31 — each year. Two finance professors found this after studying over 300 years’ worth of stock-market data, from over one hundred stock markets around the world.

They are preparing to update their paper, to include dramatically expanded research.

“Overall, the 62,962 monthly observations over 323 years show a strong Halloween effect,” write Cherry Yi Zhang, assistant professor in finance at Nottingham University’s Business School in China and Ben Jacobsen, professor of finance at the TIAS School of Business and Society in the Netherlands. And it’s not minor, either.

According to their analysis of 65 developed and emerging markets, average stock-market returns for the six months following Halloween have worked out at around 8.5% a year.

The returns for the other six months of the year, from May to October? Just 2.1%. No kidding. That, as the authors dryly note, was less than you could have earned on average in the bank.

Even less heroic calculations, including obscure and illiquid markets, yielded returns of 6.6% for the six months following Halloween, and 1.7% a year for the other half of the year.

They found that there’s a “Halloween effect” in almost every market — and it’s especially pronounced in the most actively traded and liquid markets such as here in the U.S. and in developed markets overseas.

Indeed, they say, someone buying stocks around Halloween has typically experienced lower volatility as well as higher returns— the holy grail of investing.

Let the record show that Salem, Mass. regulates the kind of advice fortune-tellers are allowed to give more rigorously than the Securities & Exchange Commission regulates forecasters on Wall Street — at least as far as stock-market predictions go.

The upside to investing at Halloween

The professors call it a “puzzle.” Or is it something creepier? The Halloween effect has lasted at least since the days of the Salem witch trials, they found. They have stock-market data for London going back to the 1690s. Over that period, calculate Jacobsen and Zhang, an investor who only bought at Halloween each year — and then sold six months later — would have trounced the overall stock-market returns.

Over any 10-year period, they found, that Halloween investor had a 90% chance of beating a buy-and-hold investor, with far higher returns.

What’s even weirder, the professors note, is that this phenomenon has persisted even though everyone now knows about it.

Usually when someone digs up a strategy or anomaly like this, all the world jumps into it and the advantage gets traded away. But not this time. “It seems to defy economic gravity,” they write. “It does not disappear or reverse itself, as theory dictates it should… The fact that trading on this strategy is particularly simple makes its continued existence even more surprising.”

You make the call.

Does the Halloween effect work every year?

I ran data going back to the 1890s. In 120 years, the Dow Jones Industrial Average DJIA, -0.50% declined in the six months after Halloween on 38 occasions. That’s nearly one year in three. And it declined by more than 5% on 23 occasions, or roughly one time in five. But globally it has worked over time, Zhang and Jacobsen’s data show.

Naturally the past is not a guarantee of the future.

Whether the recent sharp fall on the market is a buying opportunity, or the harbinger of something worse, is the multi-trillion dollar question. But the professors’ research is global, not merely U.S.-based. While U.S. stocks arguably look expensive after a nine-year boom, international and emerging markets have already come down quite a way.

Meanwhile, Warren Buffett once said that Wall Street analysts “make fortune-tellers look good.” So while in Salem I stopped by one of the town’s psychics to see if he could tell me where the stock market was headed. I’ve been following people on Wall Street for twenty years and none of them has a clue.

The Puritans tried to burn the witches out of Salem, but their stunt had the opposite effect. Thanks to the publicity, the place is now Witch Central. Occult stores and magic shops crowd the Victorian town’s narrow side streets, selling artifacts, crystals, mysterious powders, and books on tarot cards.

Down an alley I found a magic store offering readings. At the back, behind the bric-a-brac, I crossed a man’s palm with silver (actually with green paper) for a quick reading on tarot cards. Anyone expecting a mysterious, levitating genie in a flowing robe would be disappointed. He was a bald dude who didn’t look noticeably different from your average New England Patriots fan.

After sharing some details, pushing some stones around on a table, shuffling a deck of cards, and thinking deep thoughts, I got to ask one question.

It’s illegal for fortune tellers to answer this question

Alas, he’s not allowed to answer financial questions. “That’s an illegal question,” he said, when I asked him where the stock market was heading. “No one around here will answer a money question. It’s against the city ordinances.”

Let the record show that Salem, Mass. regulates the kind of advice fortune-tellers are allowed to give more rigorously than the Securities & Exchange Commission regulates forecasters on Wall Street, at least as far as stock-market predictions go.

However, after I reworked the question, I was able to ask him if he thought this was a good time for me to take on more risk generally. His answer? He thought not. But it was apparently more about me than about Wall Street.

He may be right. He may not. But he raised some sound questions. Are you prepared in your life to take on more risk? Do you have the information you need? Do you understand what you control, and what you don’t? These reasonable thoughts cost me $10. I thought that was pretty good. But then, I’ve been hanging around Wall Street witch-doctors for too long.

Snap earnings: Is a ‘Twitter-like turnaround’ ahead?