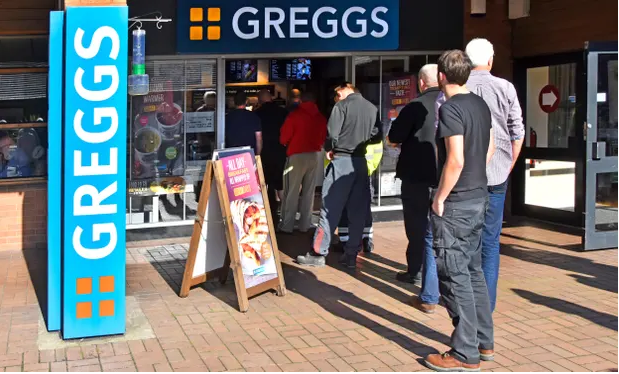 Greggs is preparing to stockpile bacon and tuna and has switched to buying all its cheese in the UK as the bakery chain tries to avert shortages in the event of a chaotic Brexit.

Roger Whiteside, the chief executive of Britain’s largest bakery chain, said the company had leased extra warehouse space and this month would begin building additional stocks of ingredients vulnerable to hold-ups at the UK’s ports.

Greggs, which opened its 2,000th shop last month, revealed its Brexit plans as it said sales at established stores were up 7.4% in the three months to 28 September, a slowdown from the 10.5% rise in the previous six months.

Shares fell 12.6% to £18.26 in the light of the slowdown and Greggs’ announcement that it now expected to open 90 stores for the year, 10 fewer than previously promised. Whiteside said the change was because a number of franchise outlet openings had been delayed until after the next financial year.

Whiteside said sales growth was likely to slow against strong trading in the previous financial year, when Greggs benefited from new breakfast ranges and the introduction of its vegan sausage roll in January 2019. But the company is aiming to boost sales by offering evening takeaways. About 60 shops are now open from 6pm to 9pm and that will extend to 250 by the end of the year.

Greggs said it still expected to meet profit expectations for the year despite slowing sales growth and rising labour and food costs partly related to Brexit.

Whiteside made clear that stockpiling would only help to avert shortages for a few days. “There’s not much we can do. We don’t have long-life items in the way that others do,” he said.

Greggs has examined all its recipes and looked at how it might replace delicate ingredients such as lettuce and tomatoes, which are largely imported from Spain over the winter, in the event of any disruption to supply.

The company has also begun sourcing all its cheese and most of its sugar in the UK, shifting away from European suppliers, to avoid disruption related to Brexit.

The purchase of some delivery lorries has also been brought forward to avoid any potential problems with shipping the vehicles from Europe after the Brexit deadline of 31 October.