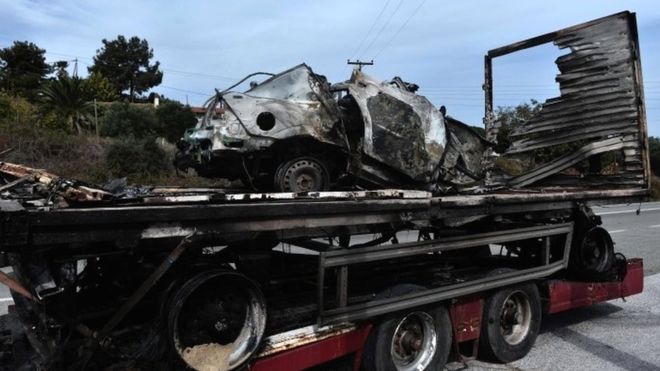 Eleven people thought to be migrants have died after their vehicle and a lorry collided head-on in northern Greece.

Both the car and the lorry burst into flames but the lorry driver managed to escape without serious injuries.

The car was heading to the city of Thessaloniki and the lorry was travelling to Kavala when the crash occurred early on Saturday.

Police said the car had previously been used for migrant smuggling.

Greece had been the frontline of the migrant arrivals, hitting a peak of more than one million from Turkey in 2015.

But the flow of irregular migrants fell dramatically after the EU and Turkey signed an agreement to send back to Turkey migrants who did not apply for asylum or whose claim was rejected.

Police said the car in question had failed to stop when officers tried to pull it over for a check earlier on Saturday.

The nationalities of the victims were not immediately known.