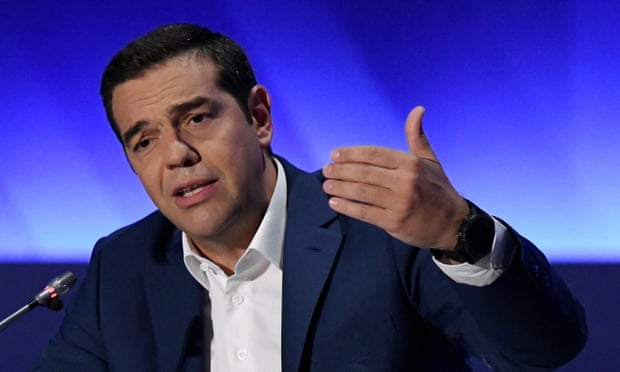 Greek prime minister Alexis Tsipras has announced a raft of relief measures “to mend wounds” created during Greece’s prolonged economic crisis, as he attempts to recover the popularity he has lost since enforcing contentious austerity measures.

In his first major policy address since debt-stricken Athens ended more than eight years of foreign tutelage under international bailout in August, the leftist leader pledged to raise wages, cut taxes and forge ahead with welfare spending. Far from backsliding on the fiscal progress the crisis-plagued country has made, the counter measures would help kickstart growth, Tsipras said, hailing a “new era of rebirth”.

“Higher wages, labour market regulation and respect for labour rights … are a prerequisite for growth,” he told delegates attending the Thessaloniki International Fair where annual economic policy goals are traditionally laid out.

“The Greek economy is stabilised … we are a normal country now.”

Tsipras said the tax cuts will include dramatically reducing a property levy for those worst affected by the crisis in 2019, and lowering sales VAT in 2021. Corporate tax, the bane of business development in the nation long on the frontline of the euro crisis, would be reduced from 29% to 25% by 2022. “It is the least we can do to mend wounds, reduce great burdens and create a growth dynamic in the Greek economy,” Tsipras said.

Other measures ranged from reinstating collective wage bargaining – a highly sensitive point among international creditors who have sought to trim the power of unions – and applying retroactive pay rises worth €1bn for university professors, the police, military and judiciary.

Shut out from capital markets, Greece has been forced to rely on emergency rescue funds totalling €288bn – the biggest bailout in global financial history – since run-away deficits triggered its near economic collapse in 2010.

In return, austerity measures worth an unprecedented €65bn have been enforced by successive governments. In peacetime few nations have suffered as much: more than a third of the populace has been left living below the poverty line with unemployment nudging 28% at the height of the crisis.

In power since 2015, the price for Tsipras and his leftist Syriza party has been enormous even with joblessness easing and the country no longer dependent on bailout aid.

The centre right main opposition New Democracy has leaped ahead in polls with a Marc survey giving it a 10.9 percentage point lead at the weekend. “No one listens to [Tsipras] anymore, simply because no one believes him anymore,” ND said in a statement reacting to his speech.

But as the country stands tentatively on its feet again and prepares to return to markets, the 44-year-old premier is desperate to claw back the lost support, insisting that under Syriza’s stewardship 300,000 jobs have been created with unemployment now at 19%.

With his four-year term due to end next September, the promise of less austerity and improved lifestyles has kicked off a protracted pre-electoral period.

On Sunday, in his annual state of the nation press conference, Tsipras said because Greece was “outperforming all fiscal targets” his government would not only meet the new goals but argue that other cuts Athens has committed to were no longer necessary. At the behest of eurozone creditors the government has agreed to further scale back pensions in January 2019.