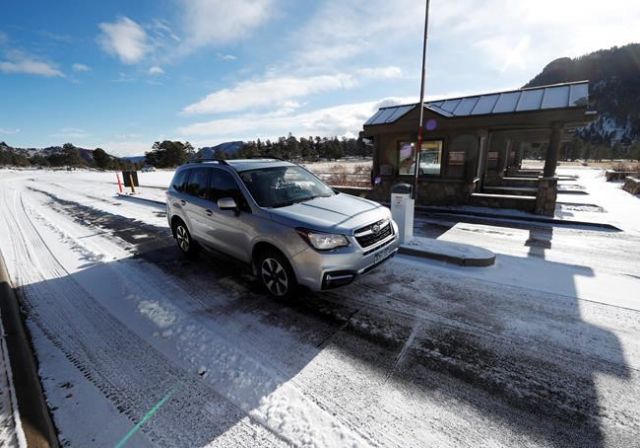 The U.S. federal government is expected to remain partially closed past Christmas Day in a protracted standoff over President Donald Trump’s demand for money to build a border wall with Mexico.

On the second day of the federal closure, Trump tweeted Sunday that what the country needs is “a good old fashioned WALL that works,” as opposed to aerial drones and other measures that “are wonderful and lots of fun” not the right answer to address the problem of “drugs, gangs, human trafficking, criminal elements and much else from coming into” the United States.

With Trump’s insistence on $5 billion for the wall and negotiations with Democrats in Congress far from a breakthrough, even a temporary measure to keep the government running while talks continued seems out of reach until the Senate returns for a full session Thursday.

From coast to coast, the first day of the shutdown played out in uneven ways. The Statue of Liberty was still open for tours, thanks to money from New York state, and the U.S. Post Office was still delivering mail, as an independent agency.

Yet the disruption has affected many government operations and the routines of 800,000 federal employees. Roughly 420,000 workers were deemed essential and were expected to work unpaid. An additional 380,000 were to be furloughed, meaning they will stay home without pay. The Senate had already passed legislation ensuring that workers will receive back pay, and the House was likely to follow suit.

No one knew how long the closures would last. Unlike other shutdowns, this one seemed to lack urgency, coming during the long holiday weekend after Trump had already declared Monday, Christmas Eve, a federal holiday. Rather than work around the clock to try to end the shutdown, as they had done in the past, the leaders of the House and the Senate effectively closed up shop. But they didn’t rule out action if a deal were struck.

“Listen, anything can happen,” Senate Majority Leader Mitch McConnell told reporters after he closed the Senate’s rare Saturday session hours after it opened.

But after ushering Vice-President Mike Pence through the Capitol for another round of negotiations, the Republican chairman of the Appropriations Committee, Sen. Richard Shelby of Alabama, said a quick end to the shutdown was “not probable.”

At the White House, Trump hosted a lunch Saturday with conservative lawmakers. Absent from the guest list were GOP leaders or any Democrats, who would be needed for a deal.

“I am in the White House, working hard,” tweeted the president, who cancelled his Florida holiday getaway to his club Mar-a-Lago due to the shutdown. First lady Melania Trump was flying back to Washington to be with her husband.

Trump’s re-election campaign sent out a fundraising email late Saturday launching what he called “the most important membership program ever – the OFFICIAL BUILD THE WALL MEMBERSHIP.” The president urged donors to sign up.

With Democrats set to take control of the House on Jan. 3, and House Speaker Paul Ryan, R-Wis., on his way out, the shutdown was providing a last gasp of the conservative majority before the new Congress.