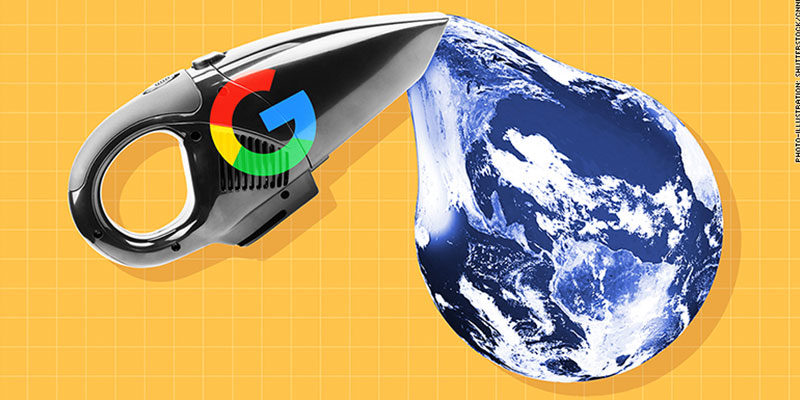 Short of chucking your phone into the river, shunning the internet, and learning to read paper maps again, there’s not much you can do to keep Google from collecting data about you.
So says a Vanderbilt University computer scientist who led an analysis of Google’s data collection practices.

His report, released Tuesday, outlines a myriad ways the company amasses information about the billions of people who use the world’s leading search engine, web browser, and mobile operating system, not to mention products like Gmail, platforms like YouTube, and products like Nest.

Although the report doesn’t contain any bombshells, it presents an overview of Google’s efforts to learn as much as possible about people. And it comes at a time of heightened concern about how much information tech companies collect, what they do with it, and how they secure it. Google has largely escaped the public and regulatory backlash directed at Facebook.

“There’s been a lot of attention obviously on Facebook in light of Cambridge Analytica,” said Jason Kint, CEO of Digital Content Next, which published the study. (DCN is a trade organization representing media publishers, including CNN.) “This quantifies and kind of establishes a baseline of, ‘Here is everything Google is doing.’”

According to the 55-page report, Google is doing a lot.

“This report is commissioned by a professional DC lobbyist group, and written by a witness for Oracle in their ongoing copyright litigation with Google. So, it’s no surprise that it contains wildly misleading information,” said a Google spokesperson.

Google collects far more data than Facebook, according to the report, and it is the world’s largest digital advertising company. Its vast portfolio of services, from Android to Google Search to Chrome to Google Pay, create a firehose of data.

Professor Douglas Schmidt and his team intercepted data as it was transmitted from Android smartphones to Google servers. They also examined the information Google provides users in its My Activity and Google Takeout tools, as well as the company’s privacy polices and previous research on the topic.

The researchers claims that almost every move you make online is collected and collated, from your morning routine (such as music tastes, route to work, and news preferences) to errands (including calendar appointments, webpages visited, and purchases made).

“At the end of the day, Google identified user interests with remarkable accuracy,” the report states.

Google can collect data even if you aren’t using your phone. The study says that a dormant Android phone with Chrome running in the background sent location data to Google servers 340 times in one 24-hour period. The study claims 11.6 MB of data passed between an Android device and Google’s servers after a day of “typical” internet use.

The torrent of data includes information people actively provide when they type something into Google Search or seek directions on Maps.

But Google collected two-thirds of its data without any input at all from users in the researchers experiment. The Android mobile operating system, Chrome web browser, applications like Search and Maps, and publisher tools like Google Analytics and AdWords can glean information from web searches, map inquiries, and other online activities without you knowing — or controlling — it, claims the study.

Google has said in the past it uses much of that data to improve its products. The information can lead to more relevant search results, for example.

But it also uses much of the information to more effectively deliver ads, which accounted for 86% of Google’s revenue in the second quarter of this year. The more information it has about someone’s interests, the better it can target ads.

Most people have long since accepted that using Google’s suite of free products means turning over your data. And the report stops short of outlining effective tactics for increasing your privacy.

Google’s own settings don’t necessarily stop collection. A recent investigation by the Associated Press found that the company continued to record location data even after a user disables the Location History option. Google said the data is used to improve services, but has updated the wording of the setting to make it clear that location information is still collected.

Switching from Android to an iOS device can minimize the data collected, according to researchers. They say an iOS device does not typically send location data to the company unless using a Google product or visiting a website that uses Google tracking tools. It did not compare it to how much data an iPhone sends to Apple servers.

But even on an iPhone, using Safari and deleting all Google apps, a person is still sharing some information with Google through ad and publisher services. Google owns its own popular marketing and online advertising services.

“It’s nearly impossible to do anything digitally without Google collecting data on you,” said Kint.

Overlooked Gas Project Could Be Biggest Winner In Trade War