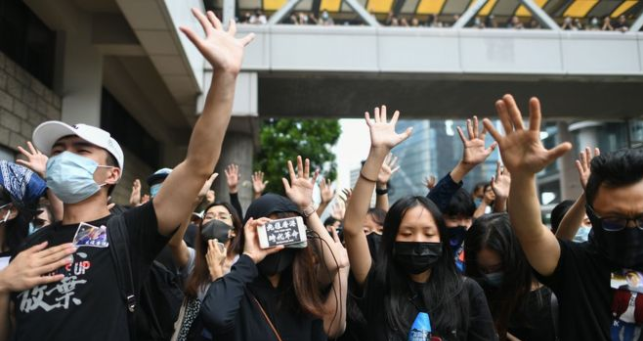 Google has removed from its app store a mobile game that lets people role play as a Hong Kong protester.

The tech giant says the app violated a policy against cashing in on conflicts, and the decision was not the result of a request to take it down.

A number of gaming companies have become embroiled in the Hong Kong protests.

Many are reluctant to offend Chinese consumers, but they have also drawn criticism from gamers over free speech.

The choice-based game, Revolution of Our Times, allowed users to play the part of a Hong Kong protestor.

Like real protestors, players could buy protective gear and weapons, but they could also be arrested and even extradited to China.

Businesses targeted
Hong Kong’s protests started in June against proposals to allow extradition to mainland China, a move many feared would undermine the city’s judicial independence and endanger dissidents.

The Chinese government has condemned the protests, and official media has often criticised companies overseas that appear to endorse them.

Protestors, on the other hand, have targeted businesses they perceive to be pro-Beijing.

Many companies worry about offending Chinese consumers, or falling foul of the government’s sensibilities, because it could affect sales in a huge market.

That is particularly true for the gaming industry. Gaming market research firm Newzoo puts the global market for gaming at $152.1bn, with China ($36.5bn) and the US ($36.9bn) together accounting for nearly half of that total.

In a statement, Google said the game was removed because it violated Google Play’s policies.

“We have a longstanding policy prohibiting developers from capitalising on sensitive events such as attempting to make money from serious ongoing conflicts or tragedies through a game,” Google said.

Google noted it had pulled apps previously for attempting to profit from other high-profile events such as earthquakes, crises, suicides and conflicts.

The move comes just days after an online gamer from Hong Kong was removed from an international tournament for the game Hearthstone because he expressed support for the protestors during a livestream.

Activision Blizzard said the gamer, identified as “Blitzchung”, had violated rules and would not be allowed to play in any Hearthstone e-sports games for the next 12 months.

The company said the competition rules banned any behaviour that might cause public disrepute or offend a portion or group of the public.

The official Chinese publication the Global Times said Chinese social media users thought Activision Blizzard’s move was an example of “how to be responsible in the Chinese market,” but move has drawn protest on social media elsewhere, with many gamers calling for a boycott of Blizzard.

The boycott has been trending on Twitter and in some cases former fans have posted pictures of their cancelled subscriptions on the Reddit gaming thread.

On the Hong Kong subreddit a number of players have suggested turning Mei, a Chinese hero in the game Overwatch, into a pro-Hong Kong character.

They hope the move would hit Activision Blizzard’s sales by getting the game banned in China.

Despite the boycott, a mobile version of Activision Blizzard’s Call of Duty video game has been downloaded more than 100 million times in its first week.

Gold posts lowest finish in over a week on news of progress in U.S.-China trade negotiations

Swindon Honda closure taskforce ‘has not met since June’