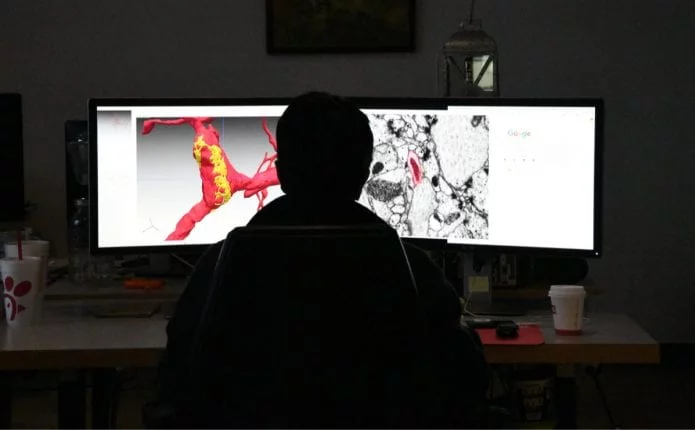 Scientists from Google and Howard Hughes Medical Institute’s Janelia Research Campus in Virginia together unveiled the biggest and the most detailed map of brain connectivity yet. The complete map of the fly brain has millions of connections between 25,000 neurons pinpointed.

The map called ‘connectome’ reveals the complete circuitry of how different parts of the brain are connected. This new breakthrough could help understand the networks involved in memory formation or neural pathways that underlie movements.

Gerry Rubin, executive director of Janelia and vice president of HHMI, was supporting this project for more than a decade. This new development is a crucial step towards understanding how the brain works. Tracing the connections between every fly neuron by hand would have taken two decades to complete if 250 people are working towards it. But the advances deep-learning algorithms and imaging technology and a partnership with Google accelerated the process.

The Janelia scientists mapped a region of the fly brain, which is about the thickness of two strands of hair, around 250 micrometers across. They traced down the path of 25,000 neurons in the brain of female fruit fly, which is one-third of the fly brain. The map includes regions that control different functions like navigation, smell, memory, and learning, which are the regions of keen interest to scientists. Its the biggest and most detailed map of the fly brain ever developed encompassing more than 20 million neural connections.

The complete data and the tools necessary to use it is made available by the FlyEM, the project team behind the connectome. In a paper published in bioRxiv on Jan 21, 2020, the team describes the work. They are planning to complete the connectome of the fly brain by 2022.

Viren Jain, former laboratory head at Janelia and now a research scientist at Google, said that this was something that people thought almost impossible to do.

The map will help scientists to understand how the brain works and will change the way neuroscience is done.

Caenorhabditis elegans, a tiny, transparent worm with just 302 neurons, was the only organism whose brain’s complete connectome was mapped to date. Scientists traced down the path of every neuron in the worm’s nervous system by hand using an electron microscope. The work published in 1986 had provided some valuable insights into how some neurons are related to the behavior.

The number of neurons in worms is not as numerous as those in humans, mice, or flies, and they made only fewer connections, yet the work required painstaking attention in detail. Connectome project in complex brains is difficult. Those projects were able to either trace the connections in a small part of the brain or covered the whole brain but captured only a fraction of cells.

The fly brain might appear very small, but it is of the size of a poppy seed, and mapping 100000 neurons in detail was a really big challenge.

The scientists sliced the fruit fly brain into very thin sections and scanned using an electron microscope. They used an algorithm to process the 50 trillion 3D pixels produced to trace each cell’s pathways. A lot of manual labor was required to proofread the data despite Google’s computing muscle.

Synthetic Cell System That Responds to Changes In the Environment