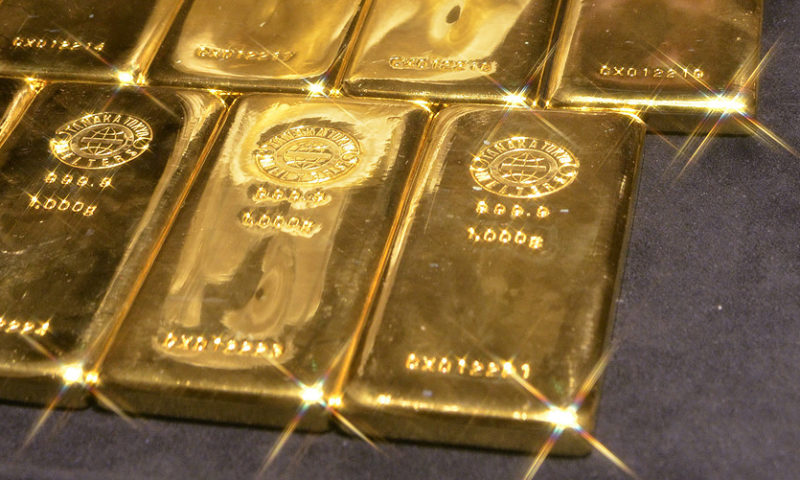 Analyst says this is “a great time” to buy gold

Gold is likely to end 2018 with its first annual loss in three years, but sentiment has improved in recent months. Prices for the precious metal are on track for the biggest quarterly rise in nearly two years, with analysts forecasting further gains in 2019.

“Gold has rallied, in fits and starts, since its August bottom,” says Brien Lundin, editor of Gold Newsletter. As of Wednesday, the metal GCG9, -0.35% trades about 4% lower year to date. However, for the fourth quarter it has outperformed U.S. stocks, up more than 4% compared with a drop of 14% for the S&P 500 SPX, -1.58% The metal is poised for its largest quarterly percentage gain since the first quarter of 2017.

The metal has “gained new momentum over the last couple of weeks with indications that the [Federal Reserve] will pause its rate hike campaign next year,” says Lundin. “The big selloffs in equities delivered a very strong message to the Fed to back off.”

On Wednesday, the central bank raised its target for the federal-funds rate by a quarter point to a range between 2.25% and 2.5%, as expected. However, the Fed projects two rate increases in 2019, not the three seen in September.

Gold futures marked a five-month settlement high of $1,256.40 an ounce Wednesday, just ahead of the Fed decision, then eased back in electronic trading. Prices climbed Thursday.

Still, some traders have questioned why gold hasn’t found more support as a perceived haven investment despite the uncertainties plaguing the markets, including the U.K.’s exit from the European Union, the U.S.-China trade dispute, and stock-market instability.

“Gold is a dynamic risk hedge over time, but isn’t a panacea for all market events,” explains Maxwell Gold, director of investment strategy at Aberdeen Standard Investments. “Gold tends to benefit most from global systemic events as well as large equity market drawdowns.” Since peaking in late September, the S&P 500 has fallen over 13% through Dec. 17, during which gold prices rose 3%, “providing a ballast against this market correction.”

Even more striking, the metal’s prices actually climbed 16% by mid-December since the June 23, 2016, Brexit vote passed—not in U.S. dollar terms, but in terms of the British pound, says Aberdeen’s Gold. “A similar story can been seen in other key gold markets such as China and India, which have seen positive local currency gold returns amid this year’s market turmoil,” he notes.

The year as whole still stands as a loss for the metal. “Key reasons for gold’s decline during 2018 were the extraordinary strength of the dollar, and likewise of the U.S. equity market,” at least until more recently, says George Milling-Stanley, head of gold strategy at State Street Global Advisors. The continuing U.S.-China trade dispute “contributed to the strengthening in the dollar, and that is what hurt gold,” he says. Gold and the dollar often move inversely as a richer dollar dulls the appeal of investors using other currencies, and strength in the stock market can lure investor interest away from gold.

Gold’s performance in 2019 will depend mostly on the same themes that impacted the metal in 2018: the dollar and U.S. equities, says Milling-Stanley. Next year, U.S. “equities will not be receiving the boost of the Trump [administration] tax cuts, and the dollar will not have the support of three or four increases in the federal-funds rate, so both are unlikely to be as strong as they have been,” he adds.

Aside from Fed policy and the dollar, Joseph Cavatoni, managing director, USA and ETFs, at the World Gold Council, says, “deteriorating financial market stability” and “structural economic reforms” will support demand for gold in the coming year.

“Global investors will continue to favor gold as an effective diversifier and hedge against systemic risk stemming from higher market volatility, political and economic instability in Europe, potential higher inflation from protectionist policies worldwide and the increasing likelihood of a recession,” Cavatoni says. Economic reforms in emerging markets like India and China will also boost gold demand for jewelry, technology, and long-term savings, he says.

This is a “great time to buy” gold, says Lundin, as many of the “bearish factors that had been holding the metal back have now completely shifted into its favor.” Another alternative is an exchange-traded fund like the SPDR Gold Shares GLD, +1.54%

Integration Should Be Priority No. 1 for Acquisition-Minded Fintechs

This holiday gift will turn your child into a savvy investor (and make $46,460)