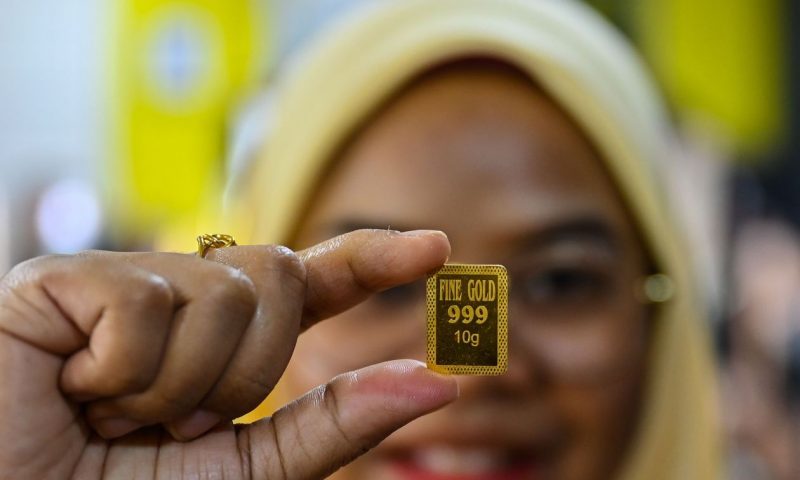 Gold futures climbed Tuesday for a second straight session, as lower bond yields and the prospect of a fresh coronavirus relief package in the U.S. combined to lift prices for bullion to their highest settlement in three weeks.

“Gold prices have found renewed support on the back of falling government bond yields, as investors realise the virus is not going anywhere for a while yet and interest rates will remain low for longer despite the rolling out vaccines in the months ahead,” Fawad Razaqzada, market analyst at ThinkMarkets, told MarketWatch.

Prices picked up some steam after a revision of third-quarter productivity costs data came in at 4.6%, down from 4.9%.

Technical analysts point out that gold has drifted above a key level at $1,850, which had previously been viewed as a first layer of support before the metal tumbled to a five-month nadir, and is now seen as a level of resistance, which the yellow metal has effectively breached.

“Bullion staged a heroic comeback lately to cross back above the crucial $1850 zone, capitalizing on a combination of falling real interest rates and a softer US dollar,” wrote Marios Hadjikyriacos, investment analyst at XM, in a daily research note.

Gold prices fell sharply in late November as the development of a successful COVID-19 vaccine undermined the case for gold as a safe haven.

On Tuesday, the U.S. Food and Drug Administration said data from a trial of a coronavirus vaccine created by Pfizer and Germany’s BioNTech BNTX, +1.92% did not raise any safety concerns ahead of an advisory meeting Thursday to review the drug for possible distribution to Americans.

Meanwhile, hospitalizations in the U.S. related to COVID-19 reached a record Monday.

Separately, investors were watching developments in the U.K. as the threat of a market-roiling no-deal Brexit loomed. U.K. Prime Minister Boris Johnson is set to travel to Brussels to meet with European Commission President Ursula von der Leyen as negotiations continue.

“It is difficult to say how much of an impact Brexit concerns have on gold,” but they certainly do have some impact, said Razaqzada.

“Concerns over Brexit are among the reasons why interest rates are so low in the U.K. and Eurozone, and low rates are why gold prices are near their historic highs,” he said.

Against that backdrop, the U.S. dollar has climbed as the British pound softens against the greenback, but the longer-term trend has been weaker for the dollar. The ICE U.S. Dollar Index DXY, -0.14%, a gauge of the buck against a half-dozen currencies, was up nearly 0.2% at 90.95, trading up from a roughly 2 1/2 year low for the currency.

‘We are only in the middle of the bull market’ and a buying opportunity could come soon, JPMorgan says