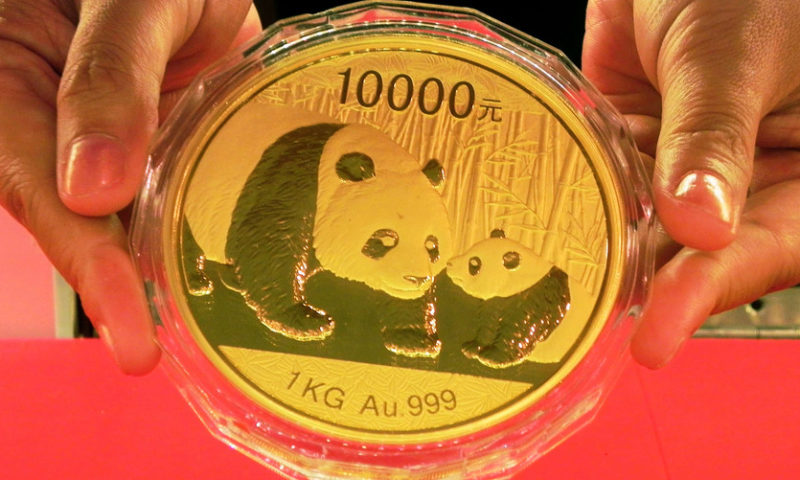 Gold futures finished higher on Monday as weakness in global stocks and the U.S. dollar helped to buoy the yellow metal, but the psychologically important $1,300-an-ounce price remained out of reach.

“Clearly, concerns toward the global economy have been fomented [Monday] by the first monthly decline in Chinese exports in over two years,” analysts at Zaner Precious Metals wrote in a daily note. “Adding into the economic uncertainty is soft European data and escalating fears of an exit wreck,” they said, referring to the U.K.’s withdrawal from the European Union.

The ICE U.S. Dollar index DXY, -0.04% was off by 0.1% at 95.556, after putting in a weekly loss of 0.6% on Friday. Weakness in the buck can help drive appetite in assets priced in dollars, like gold, among buyers using other currencies.

A downdraft in stock markets across the globe on Monday was partly behind gold gains to start the week, with China data showing an unexpected decline in imports and exports in December, which weighed on equities and commodities, fueling fears of a further slowdown in the Chinese economy that could hinder global growth—amplified by a protracted trade spat between Washington and Beijing.

That backdrop has enlivened expectations for higher prices among gold bulls, who believe that purchases of so-called haven commodities among investors will accelerate as riskier assets, including stocks, exhibit more volatility in 2019.

“The gold trade is continuing to become more fashionable as investors’ appetites grow. Indeed, the climb in geopolitical concerns are behind what is now developing to be a new bull run. We continue to look for higher prices and think a breakout above $1300 is around the corner,” wrote Peter Cardillo, chief market economist at Spartan Capital Securities.

“With Newmont Mining buying [Goldcorp], that adds an additional element of investment interest to the long side argument of gold today,” said analysts at Zaner Precious Metals.

Newmont’s acquisition of GoldCorp, “hot on the heels of Barrick Gold’s merger with Randgold effective January 2nd, comes with the gold price up almost 10% since August,” said Danny Dolan, managing director of China Post Global. “This consolidation activity makes good strategic sense; controlling costs is one of the biggest challenges across the gold mining industry.”

Also, “both of the recent major acquisitions are great news for investors in gold mining sector ETFs, which should benefit strongly from the cost savings and strategic synergies of combining these companies,” he said in emailed commentary.

Palladium, however, extended its streak of gains to a 10th consecutive session and seventh straight record settlement. March palladium PAH9, +0.37% added 0.3% to $1,282 an ounce, trading less than $10 below the per-ounce price of gold. The last time palladium settled higher than gold was in October 2002.