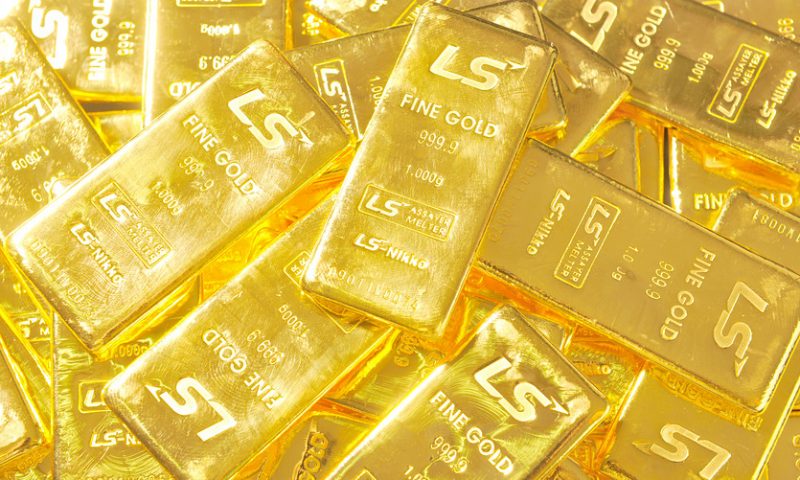 “So far this week, the economic numbers have been ringing the recession bells and today’s data has made them only louder,” said Naeem Aslam, chief market analyst at ThinkMarkets. “The data has plunged to three years low and it shows markets are getting clobbered.”

U.S. benchmark stock indexes fell sharply as service-oriented companies that employ the vast majority of American saw their weakest growth in September in three years. The ISM services survey dropped to 52.6% in September from 56.4%. That fueled safe-haven demand for gold.

The data come after a weak ISM manufacturing reading on Tuesday, the weakest in a decade.

The U.S. nonfarm-payrolls report will be released on Friday. That will hold new significance given reports of weakness in manufacturing and a weaker-than-expected private-sector report from Automatic Data Processing Inc. on Wednesday.

For the week thus far, gold trades 1% higher, while silver has edged up by 0.8%.

Weaker-than-expected global economic data and developments on the international trade front have supported some buying of assets considered havens, like gold, but overall strength in the U.S. dollar, also drawing some safety bids, has muted some of the advance for precious metals.

The ICE U.S. Dollar Index DXY, -0.33%, a gauge of the greenback against six currency rivals, recently traded around a two-year high at 99.05, though it was last down 0.3% at 98.703. Strength in the dollar can dull appetite for commodities priced in the U.S. unit.

Trade tensions also were giving lift to bullion. On Wednesday, U.S. also announced $7.5 billion in tariffs on import duties from the European Union.

“Gold rebounded to $1,500 on the back of new trade tension. The new US tariffs against the EU generated a sell off on the stock market and bullion found strength as investors were moving once again towards safe haven assets,” said Carlo Alberto De Casa, chief analyst at ActivTrade.

“From a technical point of view, the next few days will be crucial for understanding the strength of this rebound and if bullion can hold $1,500,” he said.