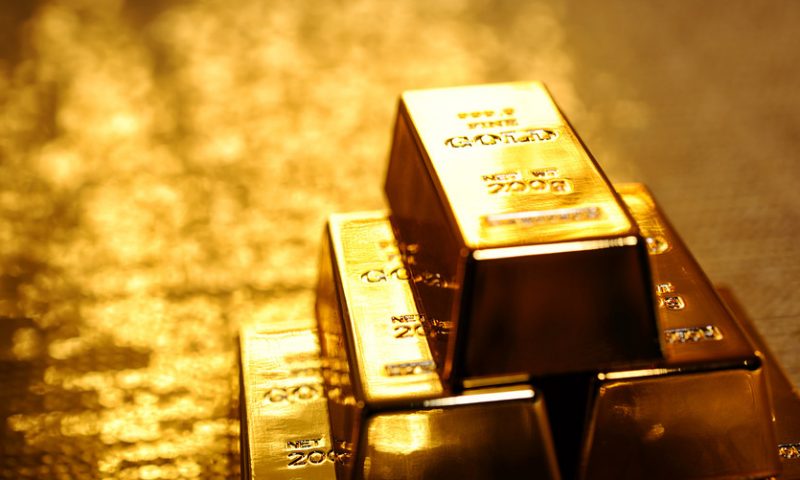 Dollar strength limits gains for the yellow metal, which ends 0.1% lower for the week

Gold futures gave up much of their earlier gains on Friday, with strength in the U.S. dollar prompting prices for the precious metal to post only a modest gain for the session, down significantly from their highest intraday level in 14 months.

Prices eased back from the session’s best levels with the dollar on track for a gain on the week, putting some pressure on dollar-denominated gold prices. The ICE U.S. Dollar Index DXY, +0.45% rose 0.6% Friday, set for a weekly rise of 1.1%.

“The fact that gold has managed to trade over $1,340 is a positive sign for next week,” said Chintan Karnani, chief market analyst at Insignia Consultants. “Corrections are a part of the big rally.”

Strong gains in the U.S. dollar were to blame for gold’s pullback from the session’s highs, said Karnani.

But aside from any potential surprises in the coming Federal Open Market Committee meeting that ends Wednesday, “all factors are bullish for gold,” he said. “Even short-term investment demand is rising for gold.”

The U.S. military claims to have a video that shows an Iranian navy boat removing an unexploded mine from near one of two tankers attacked in the Gulf of Oman on Thursday. The U.S. has blamed Iran for those attacks, a charge that country’s government denies. Oil prices surged on news of the attacks, but were still poised for a weekly loss.

A fresh flare up in tensions between the U.S. and Iran piled on the geopolitical worries for investors, who are already dealing with growing acrimony over trade between the U.S. and China. And the weekend could bring more unrest in Hong Kong, where protesters are planning more demonstrations against legislation that would allow suspects to be tried in mainland Chinese courts.

Gold has also benefited from a sharp slide in U.S. Treasury yields TMUBMUSD10Y, +0.00% as investors increasingly bet the Fed will move later this year to cut interest rates, a prediction they believe was supported by a soft inflation reading in Wednesday data. The yield on the 10-year was down at 2.0884% in Friday dealings.

Data Friday showed that U.S. consumer sentiment in June declined on the back of concerns surrounding tariffs, to a reading of 97.9 from 100 in May. Retail sales data for May, however, was upbeat, with sales up 0.5%.

“We continue to expect that a sharper slowdown in economic growth over the coming months will convince the Fed to cut interest rates, but the retail sales data reinforce our view that officials are likely to wait until the September FOMC meeting before pulling the trigger,” said Andrew Hunter, senior U.S. economist at Capital Economics.

Will It Work? Glitzy Casino Opening on Industrial Waterfront