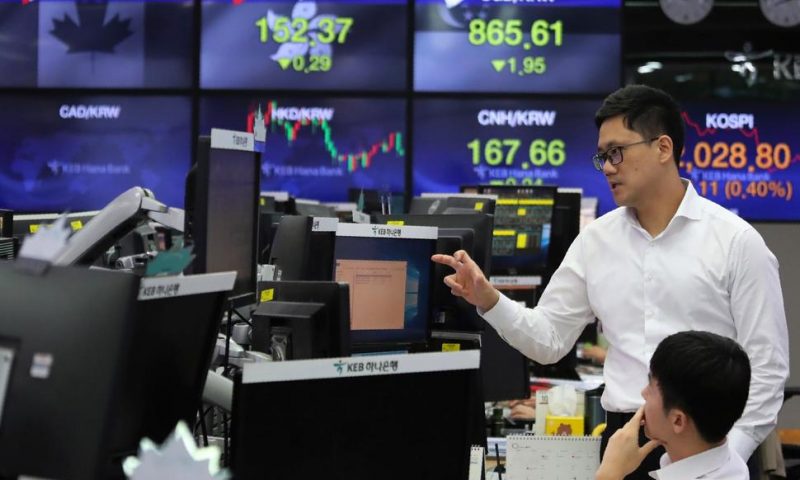 World shares mixed as US, China prepare for trade talks.

TOKYO — Global stock markets were mixed on Monday as investors cautiously awaited the outcome of trade talks between the U.S. and China.

Shares in Asia closed mostly lower and Wall Street appeared headed for a drop on the open.

All eyes are on the world’s two largest economies as they prepare to resume trade talks this week. Markets have been quick to swing on any hint of movement in the U.S.-China trade dispute, which has dragged on manufacturing around the world, including Asia, and pushed CEOs to delay investments amid uncertainty.

Robert Carnell, chief economist and head of research Asia-Pacific at ING, noted some optimism about the trade talks but warned that past optimism was often misplaced.

“It looks as if we are back to considering the merits of a narrow trade deal today, as news stories break suggesting that China is not looking to make a broader trade deal along the lines it is reported the U.S. is seeking,” he said.

Chinese offices were closed for a holiday, and officials did not respond to requests for comment on a report by Bloomberg that Chinese negotiators were seeking to limit the scope of the talks. That could reduce the likelihood of progress.

The gains Friday also gave the S&P 500 its best day in seven weeks, though the benchmark index still finished with its third straight weekly loss. The job market data for September showed the U.S. unemployment rate dropped to a five-decade low and employers were adding jobs at a healthy clip.

A strong jobs market would enable U.S. households to keep spending, supporting the economy at a time when slowing growth abroad poses a threat and President Donald Trump’s trade war with China is sapping exports and manufacturing.

CHINA’S RESERVES: China’s foreign currency reserves declined more than expected, prompting suggestions Beijing might have bought yuan to support the Chinese currency’s exchange rate ahead of trade talks with Washington. The reserves, the world’s biggest, fell by $14.8 billion to just under $3.1 trillion in September. The yuan was allowed to tumble to an 11-year low against the dollar in August but has stabilized since then. Washington claims Beijing depresses its exchange rate to make Chinese exports less expensive abroad, hurting foreign competitors. If Beijing is selling foreign currency, then the yuan’s stability might reflect “intervention following the resumption of U.S.-China trade talks,” said Martin Lynge Rasmussen of Capital Economics in a report.

Consumer Goods Giant Unilever Vows to Slash Use of Plastic