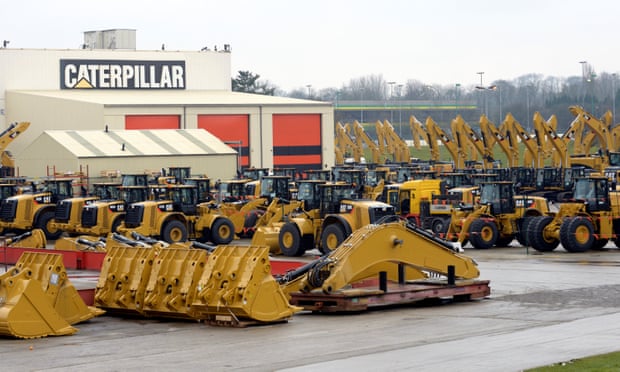 Investors are growing increasingly worried about a cocktail of risks that could act as a significant drag on the world economy. Potential headwinds include the trade dispute between the US and China, rising US interest rates, the fallout from the death of the Saudi journalist Jamal Khashoggi and the budget dispute between the EU and Italy.

Oliver Jones, a markets economist at the research firm Capital Economics, said: “Worries about problems in the US, and to some extent in the past few days China, have proved contagious.”

The Dow Jones Industrial Average of leading US companies dropped by more than 500 points in early New York trading on Tuesday, as the global sell-off that began earlier this month gathered pace. The Dow later recovered but was still about 250 points, or 1%, down by 1900 BST.

European stock markets also fell sharply, with the UK’s FTSE 100 sliding more than 90 points to close below 7,000, ending the day at a seven-month low after another jittery trading session. The leading German stock index dropped by more than 2% and the biggest French companies shed almost 1.7% of their value.

The FTSE 100 has dropped 7% since the end of September, setting the index of UK blue-chip companies on course for the worst month since May 2012. It is down more than 10% since its May peak, which is the definition of a market correction, with more turbulence predicted as Britain leaves the EU.

UK investor morale has hit its lowest level in at least 23 years, according to the financial services firm Hargreaves Lansdown.

Its investor confidence index has fallen to 53 this month from 58 in September, its lowest level since it began in 1993. It has averaged 92 over the last decade, but only 69 over the last 12 months.

Laith Khalaf, a senior analyst at Hargreaves Lansdown, says the constant drip-feed of Brexit news has had a negative effect on investor confidence.

“Investors are in grim mood, as time is running out on Brexit negotiations with little progress on show. Sentiment was dented by the financial crisis, but not to the extent we are seeing today,” he said.

Stephen Innes, the head of Asia-Pacific trading for the foreign exchange firm Oanda, said stock markets “remain shrouded in a thick blanket of risk” triggered by negative news from around the world.

Caterpillar, the US construction equipment company seen as a bellwether for the US economy disappointed investors when it reported third-quarter earnings on Tuesday with a warning that raw material costs had risen since Donald Trump’s introduction of import tariffs on steel.

It said tariffs will cost it about $40m (£31m) in the latest quarter, with an impact this year at the lower end of a range between $100m and $200m. To offset rising costs the company said it would increase the prices of the machines and engines it sells around the world by as much as 4% from January.

The company’s stock tumbled by about 7%, helping to drag down the Dow Jones index and other industrial companies that have come under pressure from the rising cost of materials and fears over slowing economic growth.

Harley-Davidson warned that tit-for-tat tariffs between the US, EU and China would cost the company about $40m and make US-made motorbikes less competitive on the international market.

Trump criticised the company earlier this year after it said the imposition of trade tariffs would force it to shift production overseas.

European markets suffered after the EU commission rejected a draft budget proposal submitted by the Italian government, in a move designed to force the populist administration in Rome to rein in its spending.

Although the move was widely expected, investors are growing increasingly anxious that the standoff between the commission and the third-largest eurozone economy has the potential to drag on for much longer than previously thought.

US confirms withdrawal from nuclear arms treaty with Russia