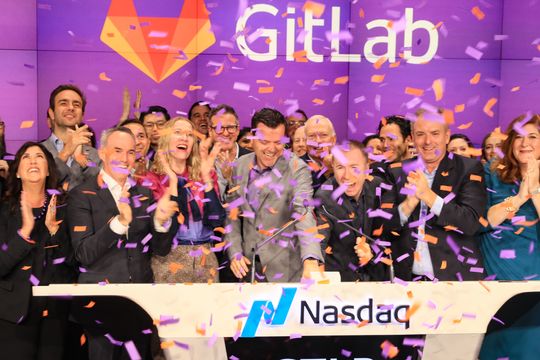 Late Wednesday, GitLab priced its stock at $77 a share, well above its already elevated range. On Tuesday, GitLab hiked its expected pricing range to between $66 and $69 a share, up from a forecast last week of $55 to $60 a share. Wednesday’s pricing values the company at $11 billion, based on 143 million shares expected to be outstanding after the offering.

The IPO has been in the works for a little more than a year. In fact, GitLab Chief Financial Officer Brian Robins, who’s only been with the company for 13 months, was hired, in part, in preparation for the IPO.

“I came on with a mandate to bring the company public,” Robins told MarketWatch in an interview. “I started day one on IPO readiness.”

The all-remote software company specializes in so-called DevOps software, which allows software developers and operators to collaborate on projects to provide faster and more relevant software updates to their internal systems on a near-constant basis.

The company believes it was the largest all-remote company pre-pandemic and uses that experience to provide companies with free remote-work consulting, Robins said. On the company’s website, it provides a guide on how to run an all-remote workforce.

Regarding its most direct competitor, GitHub, which was acquired by Microsoft Corp. MSFT, +2.17% in 2018 for $7.5 billion, Robins said the potential market is big enough for both of them for now.

“From a Microsoft perspective, we don’t see Microsoft in that many deals,” Robins told MarketWatch. “It’s not the majority of deals. And when Microsoft is in a deal, our win rate is the same with them in it, as when they’re not in it. If you took our revenue and Microsoft’s GitHub revenue combined, we are a fraction of the $40 billion market out there.”

“Both of us are competing against DIY — do-it-yourself — DevOps,” Robins said, referring to the DevOps market as one of the most underpenetrated software markets out there.

Robins noted that one large S&P 500 SPX, +1.71% financial customer turned its launch application time to two hours from two weeks using GitLab’s platform. “If you’re getting an application out to market that much quicker, there’s revenue acceleration,” he said.

The stock’s strong debut comes on a day of relatively strong investor interest in IPOs, as the Renaissance IPO exchange-traded fund IPO, +1.56% closed up 1.5%, while the S&P 500 index gained 1.7%.

After a 71% profit, this investor just got out of oil and is putting everything into this commodity instead