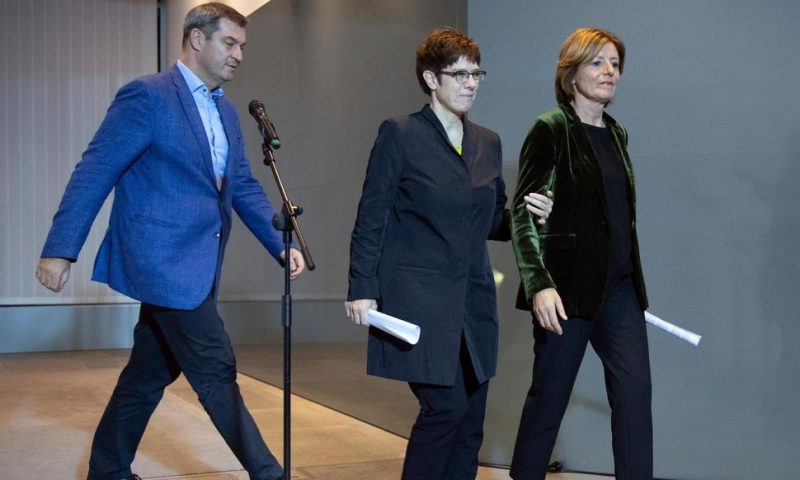 Germany’s governing parties have agreed to reform the country’s pension system, setting aside an ideological dispute that had threatened to unravel the coalition government.

BERLIN — GERMANY’S governing parties agreed Sunday to reform the country’s pension system, setting aside an ideological dispute that had threatened to unravel the coalition government.

Annegret Kramp-Karrenbauer, the head of German Chancellor Angela Merkel’s center-right Christian Democratic Union, said that the parties had found common ground “after long negotiations” on the question of topping up the pensions of low-paid people who have worked for at least 35 years.

She told reporters in Berlin that recipients would be means-tested for the new basic pension — a key demand of her party.

Malu Dreyer, interim leader of the center-left Social Democrats, said the agreement would benefit up to 1.5 million retirees, mostly women.

The deal, which includes a number of other adjustments to the pension system, still needs approval from lawmakers, but party leaders said they were confident of getting support.

Senior Social Democrats had warned that without a compromise on their key project, it would be difficult to keep the ‘grand coalition’ going until the next national election scheduled for 2021.

Dreyer said the pension reforms were a matter that was “close to the heart” of her party, which has been struggling with poor results in recent elections, prompting some to demand that it quit the government early.

“We have got a major social reform rolling,” she said of Sunday’s agreement. “That’s a good signal to make clear to my party colleagues that without the Social Democrats (in government) this certainly wouldn’t have happened.”