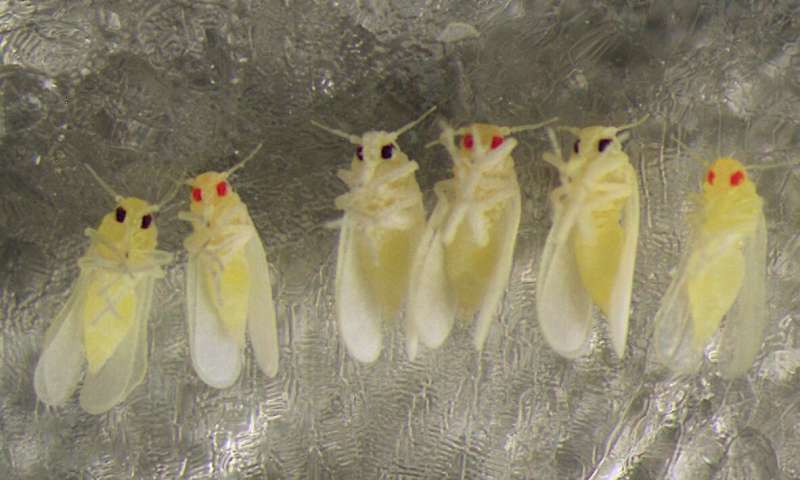 Whiteflies are among the most important agricultural pests in the world, yet they have been difficult to genetically manipulate and control, in part, because of their small size. An international team of researchers has overcome this roadblock by developing a CRISPR/Cas9 gene-editing protocol that could lead to novel control methods for this devastating pest.

According to Jason Rasgon, professor of entomology and disease epidemiology, Penn State, whiteflies (Bemisia tabaci) feed on many types of crop plants, damaging them directly through feeding and indirectly by promoting the growth of fungi and by spreading viral diseases.

“We found a way to genetically modify these insects, and our technique paves the way not only for basic biological studies of this insect, but also for the development of potential genetic control strategies,” he said.

The team’s results appeared on April 21 in The CRISPR Journal.

The CRISPR/Cas9 system comprises a Cas9 enzyme, which acts as a pair of ‘molecular scissors’ that cuts DNA at a specific location on the genome so bits of DNA can be added or removed, and a guide RNA, that directs the Cas9 to the right part of the genome.

“Gene editing by CRISPR/Cas9 is usually performed by injecting the gene-editing complex into insect embryos, but the exceedingly small size of whitefly embryos and the high mortality of injected eggs makes this technically challenging,” said Rasgon. “ReMOT Control (Receptor-Mediated Ovary Transduction of Cargo), a specific type of CRISPR/Cas9 technique developed in my lab, circumvents the need to inject embryos. Instead, you inject the gene-editing complex which is fused to a small ovary-targeting molecule called BtKV, into adult females and the BtKV guides the complex into the ovaries.”

To explore the use of ReMOT Control in whiteflies, the team targeted the “white” gene, which is involved in eye color. When this gene is functioning normally, whiteflies have brown eyes, but when it is non-functional due to mutations, the insects is supposed to have white eyes. The team found that ReMOT Control generated mutations that resulted in juvenile insects with white eyes that turned red as they developed into adults.

“Tangentially, we learned a bit about eye color development,” said Rasgon. “We expected the eyes to remain white and were surprised when they turned red. Importantly, however, we found that the mutations we generated using ReMOT Control were passed on to offspring, which means that a change can be made that is inherited to future generations.”

Rasgon said the team hopes its proof-of-principle study will allow scientists to investigate the same strategy using genes that affect the ability for the insects to transmit viral pathogens of crop plants to help control the insects and protect crops.

“This technique can be used for any application where you want to delete any gene in whiteflies, for basic biology studies or for the development of potential genetic control strategies,” he said.

How the immune system reacts to hepatitis C viruses