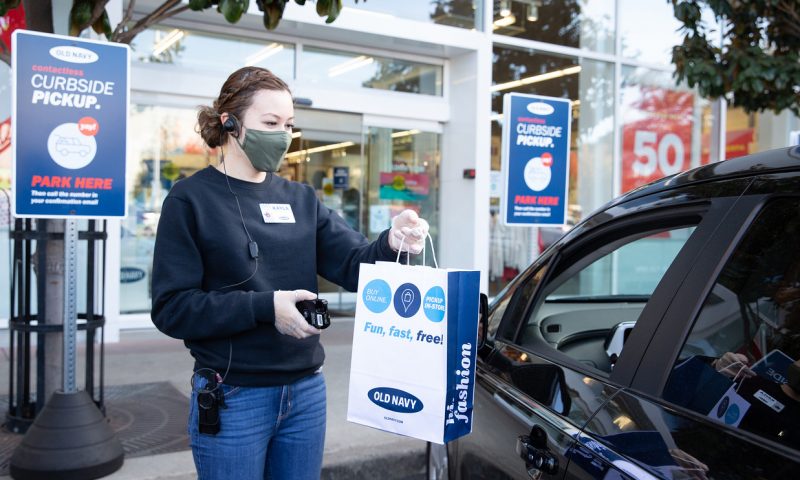 Masks now account for 4% of sales across the company, and MSNBC’s Steve Kornacki made khaki pants a hot item

Gap Inc.’s turnaround is being led by the Old Navy and Athleta brands as the namesake and Banana Republic brands continue to struggle during the pandemic.

Still, Old Navy sales rose 15%, with comparable sales up 17% for the quarter. The company notes that 75% of that brand’s fleet of stores can be found “off-mall,” which puts Old Navy at an advantage.

The company expects the two brands to account for 70% of the company’s sales by the end of 2023.

On the other hand, the Gap Global brand fell 14%, which was attributable in part to the company’s effort to shutter underperforming stores. Online sales were up 38% year-over-year.

And Banana Republic, which the company says represents about 10% of the total company sales, fell 34%. Gap Inc. Chief Executive Sonia Syngal told analysts on the company’s earnings call that it was an 18-point improvement from the second quarter.

“As we noted during our investor meeting, Banana Republic continued to face challenges driven by the shift in customer preference from a more formal workwear to casual in light of work-from-home trends,” Syngal said, according to a FactSet transcript.

“With this in mind, the brand is working hard to update its product assortment, prioritizing more relevant categories like lounge, sleep, active, fleece and sweaters with a reduced focus on workwear categories like tailored fitting.”

In addition to improvements at Old Navy and Athleta, the company says that face masks, a popular item during the coronavirus pandemic, account for 4% of sales across the company.

GlobalData notes that the company moved quickly on the item at the start of the pandemic, and though the demand will not last forever, it’s helpful for the company now.

And khakis made a comeback thanks to MSNBC’s Steve Kornacki, who wore them through his presidential election coverage.

“Whether it was introducing khakis in the notion of casual Fridays to the New York Stock Exchange in the late 1990s, or a modern version of these Gap khakis making headlines during election coverage earlier this month, it’s about more than just a pair of pants,” Syngal said.

“It’s about relevance. And since our recent election coverage, we saw a dramatic increase in online traffic, and within a day, the number of straight-fit palomino brown khakis we sold online went up 90%.”

GlobalData attributes Old Navy’s successful quarter to its focus on comfortable clothing, “which is one of the few apparel categories that has held up relatively well during the pandemic,” as well as affordable pricing, which has become more important to shoppers facing financial uncertainty.

Moreover, Old Navy “has remained cheerful and upbeat at a time when consumers have been looking for relief from the bleakness of the pandemic.”

“The problems of a dull brand image, a lack of clarity about who the customer is, and a constant cycle of discounting all remain fundamental issues that need to be resolved sooner rather than later,” wrote Neil Saunders, managing director at GlobalData.

Cowen analysts also acknowledge that Gap has “an aesthetic journey” ahead, but expects the company’s digital and marketing investments are yielding share gain opportunities.

BMO Capital Markets analysts noted the $210 million in buyout costs that Gap said it incurred as it tried to get out of “high-profile” stores.

“It doesn’t repeat other than maybe in Q4,” said Katrina O’Connell, Gap’s chief financial officer, on the earnings call, according to FactSet.

Watch:How to pick winners in the retail sector amid the pandemic

“[G]oing forward, there is an ongoing rent benefit that’s more associated with the monthly rents we would have been paying in those stores.”

Even with these costs, Gap notes that many store closures will come as a result of lease expirations. The number of Gap and Banana Republic stores should be reduced by 30% by the end of 2023, down to about 870 stores.

BMO said savings associated with these store closures will continue through fiscal 2021.