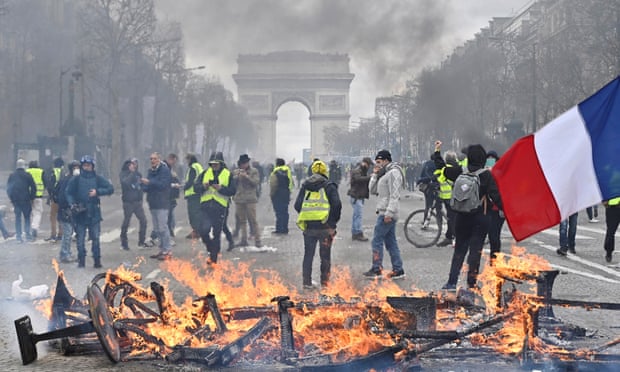 An 18th weekend of gilets jaunes protests erupted once more into violence and looting as masked demonstrators smashed their way into luxury stores on the Champs-Élysées and destroyed one of the street’s most celebrated restaurants.

The Hugo Boss and Nespresso stores were among those targeted as well as the chic Le Fouquet’s restaurant, popular with the wealthy and powerful.

Le Fouquet’s restaurant is seen as symbolic of French power and was a favourite with the late Socialist president François Mitterrand, a regular diner with his own table – number 83. Former president Nicolas Sarkozy was criticised for holding his election victory party at Le Fouquet’s in 2007, leading to him being seen as out of touch with ordinary people before even taking office.

The violence erupted a day after Emmanuel Macron’s “great national debate” closed and as the yellow vest movement appeared to be running out of steam, with dwindling numbers turning out for weekend protests. The national debate was Macron’s response to the concerns of ordinary people in what started as a grassroots movement against fuel tax rises last November.

As well as smashing luxury store fronts, protesters on the Champs-Élysées attacked police and police vehicles. By mid-evening, police had arrested almost 240 protesters and estimated there were up to 10,000 gilets jaunes demonstrating in the city.

Police said 42 protesters, 17 of their own officers and one firefighter were injured.

Macron cut short a weekend ski trip in the Pyrenees to return to the capital on Saturday night for a crisis meeting with ministers.

“We are attached to constitutional rights, but we’ve got people who through all means quite simply want to make a wreck of the republic, to break things and destroy, running the risk of getting people killed,” Macron said.

“I want us to very precisely analyse things and as quickly as possible take strong, complementary decisions so this doesn’t happen again,” he told ministers.