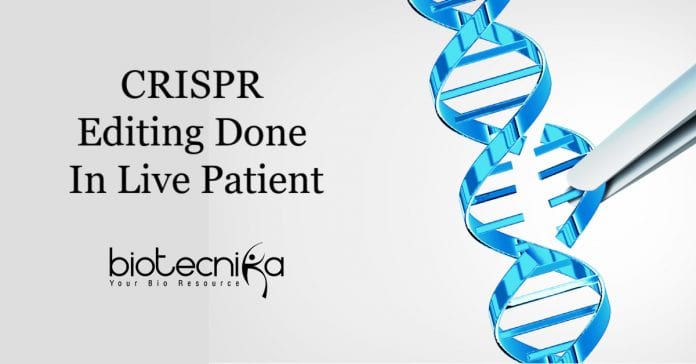 First Direct Use Of CRISPR In Humans By Harvard Doctors

Scientists edited the DNA inside a living human being for the first time ever. Harvard doctors edited the genome of a patient with a rare genetic disorder that causes blindness. Usually, researchers remove the cells from the live patient to use them for CRISPR editing. But this is the first time doctors are editing human DNA inside without removing the cells.

The doctors injected the patient’s eye with a combination of harmless viruses and CRISPR-created instructions for editing to achieve this groundbreaking medical feat. The viruses acted as the messengers delivering gene edits to the cells. The CRISPR tool sent through the viruses were supposed to cut the genes that caused the blindness. By removing the respective gene, scientists hoped that the body will produce proteins that would prevent the retina cells from dying, restoring the vision.

The results will be available only after several weeks. Eric Pierce, a professor of ophthalmology at Harvard Medical School said that its the first time CRISPR is being used directly in a human. The scientists are really optimistic about the results.

This technology has far-reaching implications. If successful, this new breakthrough development can fix many serious conditions and diseases like Huntington’s disease, genetic forms of dementia, and some muscular diseases. The old man who has undergone the treatment volunteered to have this experimental treatment done, while his blindness was not life-threatening.

If the results are positive, this promising technology could be applied to younger patients also, for various genetic conditions. Scientists all over the world are dreaming for a day when CRISPR can be used to cure thousands of diseases. Francis Collins, director of the National Institutes of Health is really hopeful about the technique.