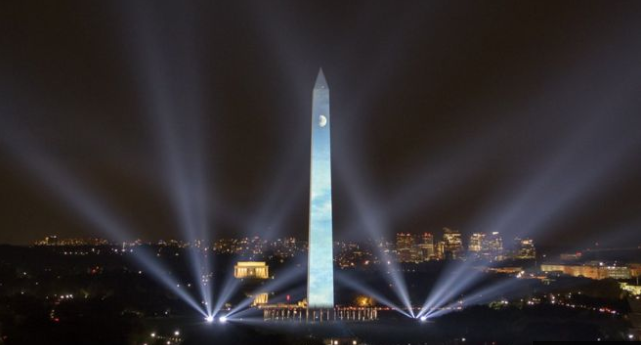 Thousands of people have been celebrating the 50th anniversary of the first moon landing.

Hours later, at 21:56 CT (0356 GMT), Neil Armstrong made history by becoming the first person to walk on the moon.

Originally inspired by the US’s Cold War rivalry with the Soviet Union, the mission is now remembered as an iconic moment for stargazers all over the world.

‘We’re breathing again’
Nasa marked the anniversary by streaming footage of the launch online, giving a new generation a chance to see the historic moment that was watched by half a billion people 50 years ago.

At the moment the spacecraft landed, Apollo 11 commander Armstrong said: “Houston, Tranquility Base here. The Eagle has landed.”

Charlie Duke, the capsule communicator, responded from mission control in Houston: “Roger, Tranquility. We copy you on the ground. You got a bunch of guys about to turn blue. We’re breathing again.”

Hours later, as he first stepped onto the moon’s surface, he uttered the historic phrase: “That’s one small step for man, one giant leap for mankind.”

Armstrong was joined by his crewmates Buzz Aldrin and Michael Collins. All three were born in 1930, and although Aldrin and Collins are still alive, Armstrong died in 2012 at the age of 82.

Aldrin, the second person to walk on the moon, tweeted on Saturday: “Today, America put the big question to rest: We got there first. We landed on the moon with 250 million Americans watching our backs.

“The truth is: that mission belongs to all of them, and to future generations of Americans who dream to reach the moon once more.”

Michael Collins, the third crew member, told Fox News that it’s “not very often” he thinks about the mission.

“I lead a quiet life,” he said. “I’ll be walking along down my street at night, when it’s starting to get dark, and I sense something over my right shoulder – and I look up and see that little silver sliver up there and think, ‘Oh, that’s the moon! I’ve been there!'”

How the world has celebrated
Cities globally have held events to celebrate the landmark anniversary – including at Nasa’s visitor centre Space Centre Houston, near the site of the Apollo 11 launch.

Artefacts from the mission have been exhibited at the Smithsonian’s Air and Space Museum in Virginia, including the space suit Armstrong travelled in.

The Museum of Flight in Seattle also screened the original footage of the landing, recreating a 1969 living room complete with a contemporary TV.

On Friday night, a 17-minute show featuring images from the moon landing were projected on to the Washington Monument in Washington DC, while crowds of people watched from the National Mall.

The Grand Palais in Paris marked the anniversary with an exhibition focused on the moon.

The show, which opened in April and closes on Monday, features a giant replica of the moon that hangs from the building’s glass ceiling.

Artist SPY also created a giant moon for the anniversary, which is being displayed on the rooftop of a building in Madrid.

’50 years after a small step for man’
Earlier, in a launch coinciding with the anniversary, a Soyuz spacecraft carrying astronauts from the US, Russia and Italy took off from the Baikonur Cosmodrome in Kazazkhstan, bound for the International Space Station.

At 23:48 BST, Russian space agency Roscosmos tweeted that the spacecraft had docked successfully.

As the rocket launched, a Nasa presenter said: “And lift off – 50 years after a small step for man, the Soyuz rocket and its multinational crew take a giant leap off the launch pad bound for the international space station.”