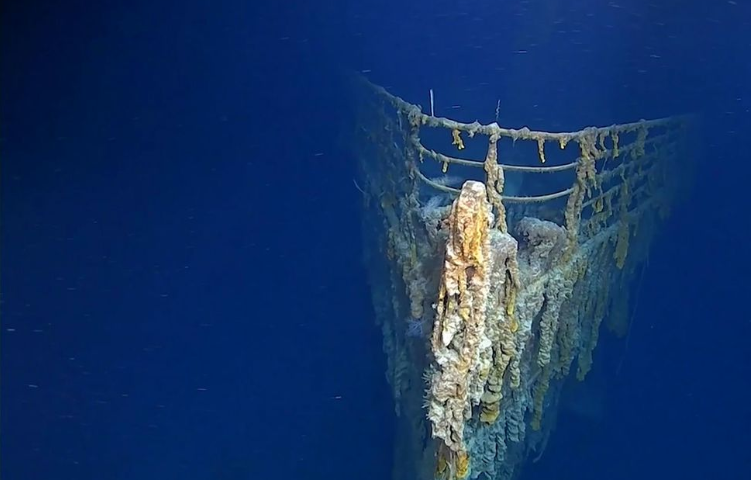 Researchers say the shipwreck is ‘returning to its elemental form.’

THE FIRST DIVE IN 14 years to the Titanic shipwreck on the seafloor of the northern Atlantic ocean revealed that the infamous vessel is slowly succumbing to the elements.

The RMS Titanic sits more than two miles below the surface on the ocean floor in near-freezing waters about 370 miles south of Newfoundland. The grand ship sank on April 15, 1912 on its voyage from the United Kingdom to the U.S. after it struck an iceberg. More than 1,500 people died.[

First discovered in 1985, the wreck hadn’t been visited since 2005, but an exploration by a team from Triton Submarines earlier this month reached the sunken ship in human-occupied submersibles.

The team dove 12,500 feet below the surface and captured photos and video footage of Titanic during five dives over eight days, a press release from Triton Submarines stated. The researchers used submersible camera systems to “capture the wreck in a way it’s never been seen before.”

The footage will allow the team to assess the Titanic’s condition and visualize the wreck using augmented reality and virtual reality technology. A documentary of the mission is also being made.

The vessel is succumbing to salt corrosion, metal-eating bacteria and deep current action. Data gathered from the dive will help the team predict its future deterioration. The wreck is now home to vast marine life, including fish and sea anemones.

“The most fascinating aspect was seeing how the Titanic is being consumed by the ocean and returning to its elemental form while providing refuge for a remarkably diverse number of animals,” Patrick Lahey, Triton Submarines president and co-founder, said in the release.