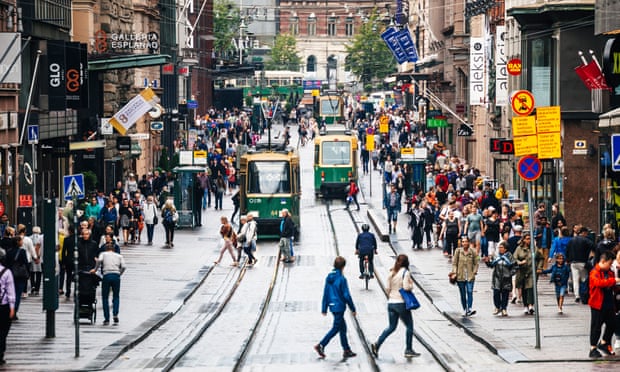 Europe’s first national government-backed experiment in giving citizens free cash failed to encourage its participants to work more as organisers had hoped – but it did improve their wellbeing.

Under Finland’s two-year basic income trial, which ended a month ago, a random sample of 2,000 unemployed people aged 25 to 58 were paid a monthly €560 (£475), with no requirement to seek or accept employment. Any recipients who took a job continued to receive the same amount.

Aimed mainly at seeing whether a guaranteed income might incentivise people to take up more low-paid or temporary work by removing their concerns about losing benefits, the scheme was strictly speaking not a universal basic income (UBI) trial since the payments were made to a restricted group and not enough to live on.

But the government had hoped it would shed light on major policy issues such as whether an unconditional payment might reduce anxiety among recipients, and allow authorities to simplify a complex social security system struggling to cope with a fast-moving and insecure labour market.

Surveying initial results from the trial, Finland’s minister of health and social affairs, Pirkko Mattila, said that based on the the first year’s data the impact of the monthly cheque on employment “seems to have been minor”.

But according to the scheme’s chief researcher, Olli Kangas, participants were happier and healthier than the control group. “The basic income recipients of the test group reported better wellbeing in every way (than) the comparison group,” he said.

Economist Ohto Kanniainen said the low impact on employment was not a surprise, given that many jobless people in Finland have few skills or struggle with difficult life situations or health concerns. “With unemployed people, financial incentives don’t work quite the way some people would expect them to,” he said.

But people who took part in the trial were generally positive. Tuomas Muraja, a 45-year-old journalist and author, said the basic income had allowed him to concentrate on writing instead of form-filling or attending jobseekers’ courses.

He said the end of the two-year trial, during which he published two books, had made it difficult again for him to accept commissions, because “I … can earn only 300 euros per month without losing any benefits”.

Sini Marttinen, 36, had been unemployed for nearly a year before “winning the lottery”, as she described the trial. Her basic income gave her enough confidence to open a restaurant with two friends. “I think the effect was a lot psychological,” the former IT consultant told Reuters.

Her income rose only by €50 a month compared with the jobless benefit she had been receiving, “but in an instant, you lose the bureaucracy, the reporting”, Marttinen said.

The idea of UBI – appealing both to the left, which hopes it can cut poverty and inequality, and to the right, which sees it as a possible route to a leaner, less bureaucratic welfare system – has gained widespread traction amid predictions that automation could threaten up to a third of jobs.

Finland’s centre-right government’s original aim was to expand the trial after two years in a bid to combat unemployment, which has been persistently high for years. But it changed tack last April, instead imposing benefits sanctions on unemployed people who refused work. Joblessness has since hit a 10-year low of 6.6%.