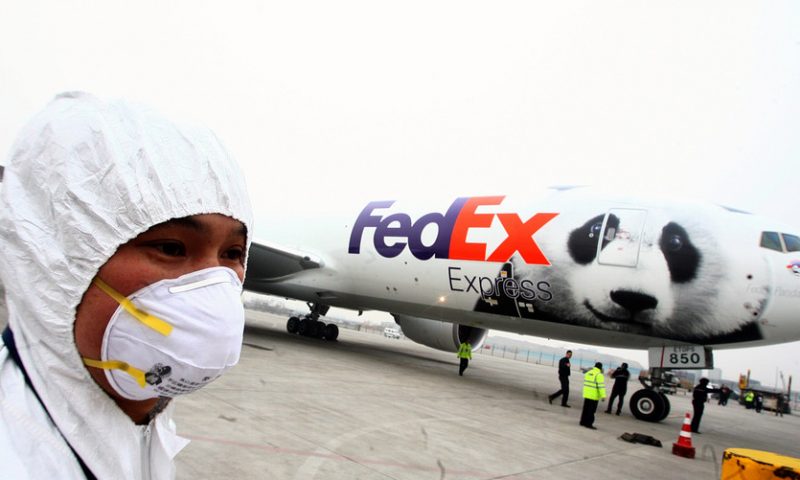 Shares of FedEx Corp. sank Monday toward a three-year low, as the package-delivery giant was hurt by the fallout from the U.S.-China trade war.

The extended selloff comes after a report over the weekend that China is conducting a regulatory investigation of FedEx, after the company diverted packages sent by China-based network equipment giant Huawei to FedEx’s headquarters in Memphis, rather than being delivered to Huawei offices in Asia.

FedEx said the packages were diverted accidentally, suggesting it was not a result of the U.S. sanctions on Huawei.

Analyst Thomas Wadewitz at UBS followed by slashing his stock price target to $136, the lowest of the 27 analysts surveyed by FactSet. Wadewitz reiterated the sell rating he’s had on FedEx since April 26, when he became the lone analyst covering FedEx to be bearish.

The price target is now about 10.7% below current levels.

“While it is difficult to anticipate the outcome [of China’s investigation], we believe it is reasonable to anticipate pressure on [FedEx’s] business with a portion of its China outbound customers which adds to the current backdrop of weak international airfreight activity,” Wadewitz wrote in a note to clients.

Wadewitz estimates that China-related business revenue is about $4.5 billion, or 6% of total revenue.

The average rating of the 27 analysts surveyed by FactSet is overweight, which is the equivalent of buy, and the average price target is $207.29, or 36.1% above current levels.

They ditched America to retire by a lake in Chile on about $3,000 a month — and rarely come back