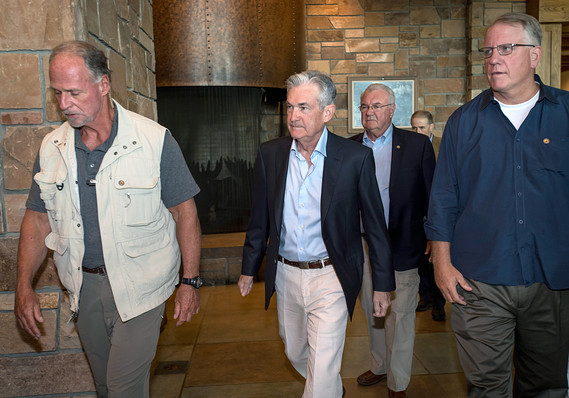 The Federal Reserve has been insisting that its plan to shrink its balance sheet would be like “watching paint dry.”

On Friday, one Wall Street expert politely told them that this view was beyond ridiculous.

Lisa Emsbo-Mattingly, director of research in the global asset allocation group at Fidelity Investments, said the turmoil experienced by financial markets in the fourth quarter was the unwinding of search-for-yield investments put in place by investors as a result of global central bank asset purchases.

Global investors had been trained to expect that central banks would be buying assets.

The turmoil in equity markets DJIA, +0.70% SPX, +0.64% was due to the fact that “tried and true techniques [to capture yield] have begun to falter,” she said.

Emsbo-Mattingly spoke at a forum on monetary policy sponsored by the University of Chicago Booth Business School. She said she was speaking for herself and her views did not represent Fidelity policy.

The all-day conference was attended by more than a half-dozen senior Fed officials.

In the question-and-answer session, several other Wall Street economists questioned why the Fed was pausing interest rate hikes and signaling it would end its balance sheet shrinking. They said these policies were simply leading global investors to put back on these carry trades.

Emsbo-Matttingly said this was a “conundrum” for the Fed that the carry trades were back on since the Fed’s January meeting.

“My recommendation [is] for the Fed to think about the implications of not just what their central bank policies are but also in connection with the global financial systems and the other global central banks,” she said.

She suggested the next financial crisis may be brewing in “cross-currency markets.”

The Fed needs to consider the effects of their policy and the policies of other central banks and “how interact with the rest of the world,” Emsbo-Mattingly said.

First, asset purchases favored financial engineering over investment. Given the uncertain economy, it was a “simple equation” for a corporate chief financial officer to decide to buy back stock using very cheap capital rather than invest in the business. This led to a decline in productivity.

Secondly, there was an ever-increasing global search for yield. Negative bond rates opened up some interesting dynamics for carry trades.

An example of this is the “short-volatility” trade. These trades started to unwind in 2018, leading to market turmoil.

The U.S. fixed income market became an extremely attractive market for hedged trading as the result of global QE.

In addition, U.S. corporations were able to sell their debt to willing foreign buyers. Japanese institutions were by far the biggest buyer of corporate CLOs.

This trade worked extremely well until last year when hedging costs made this carry trade uneconomic.

“The resulting change in flows into U.S. assets certainly was felt in the capital markets in the fourth quarter,” she said. There are other risks in the “cross-currency markets,” she said.

Central bank asset purchases also led to a dramatic explosion of debt in China, she said. Chinese policy makers were able to use credit expansion to counter any economic woes.

Roku short sellers have been burned this year as stock doubled

Bitcoin on track for its best week in two months