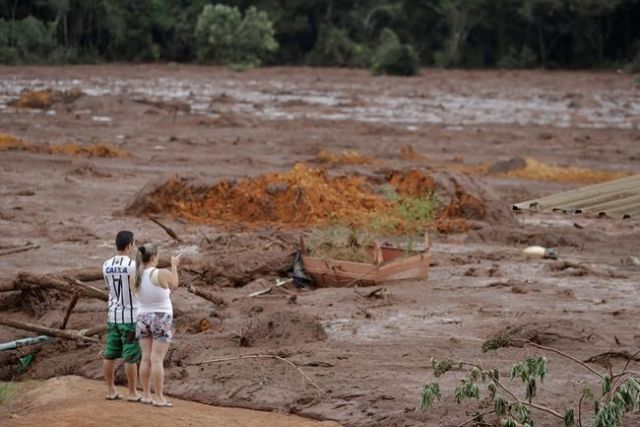 Brazilian officials on Sunday suspended the search for potential survivors of a dam collapse that has killed at least 40 people amid fears that another nearby dam owned by the same company was also at risk of breaching.

Authorities were evacuating several neighbourhoods in the southeastern city of Brumadinho that were within range of the B6 dam owned by the Brazilian mining company Vale. There was no immediate word on how many people were evacuated.

“Leave here, this is at risk!” police officials told firefighters in a lower-lying area. “Within a little while, more mud will fall.”

The firefighters had been working to extract a cow found alive in the mud, but they pulled back on the order of police, leaving the animal.

While the ground search was stopped, helicopters continued to fly over the area, possibly so they would not be hit if another collapse happened.

Caroline Steifeld, who was evacuated, said she heard warning sirens on Sunday, but no such alert came on Friday, when the first dam collapsed.

“I only heard shouting, people saying to get out. I had to run with my family to get to higher ground, but there was no siren,” she said, adding that a cousin was still unaccounted for.

Even before the latest setbacks, hope that loved ones had survived a tsunami of iron ore mine waste from Friday’s dam collapse in the area was turning to anguish and anger over the increasing likelihood that many of the hundreds of people missing had died.

Company employees at the mining complex were eating lunch Friday afternoon when the first dam gave way. By Saturday night, when authorities called off rescue efforts until daybreak, the dam break toll stood at 40 dead with up to 300 people estimated to be missing.

All day Saturday, helicopters flew low over areas encased by a river of mud and mining waste as firefighters dug frantically to get into buried structures.

“I’m angry. There is no way I can stay calm,” said Sonia Fatima da Silva, as she tried to get information about her son, who had worked at Vale for 20 years. “My hope is that they be honest. I want news, even if it’s bad.”