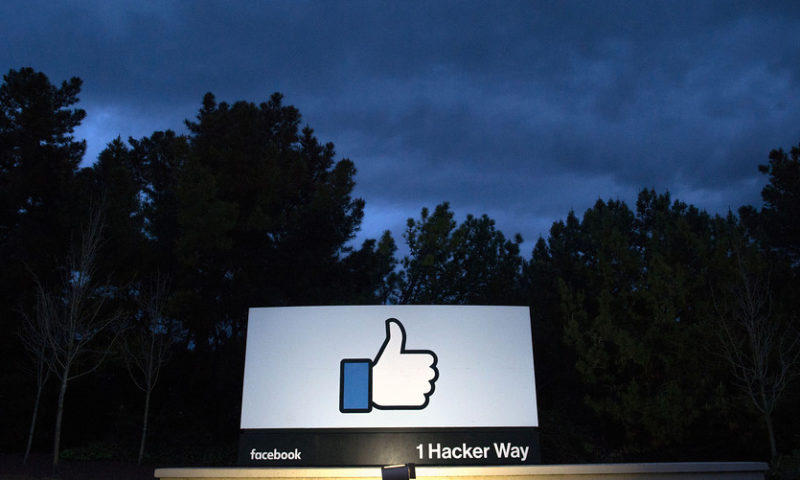 After the largest stock drop in its history and weeks of negative news, Facebook Inc. will have to reveal if it has faced recriminations from its most important customers: Advertisers.

The months following a July earnings report that was devastating to Facebook FB, -3.70% stock have not been kinder to the social-media giant. The company disclosed another hack involving millions of people, has detailed efforts to halt the spread of misinformation on the platform, and has been faced with allegations it sought access to financial firms’ customer data, among other issues.

As the company prepares to report third-quarter earnings Tuesday after the market closes, most of that decline remains. Facebook shares have lost 16.9% in the three months since it provided a disappointing forecast for the period, and now will have to reveal if it was able to outperform those expectations.

Investors and analysts are looking for signs that the social network has successfully combated some of the questions around whether it can, in fact, continue to grow its member base at the same rate it has historically. And, if it’s unable to do so — or even if Facebook can — whether the tech giant can sustain revenue growth as well.

North American growth may continue to be a problem for the company, potentially because of the Cambridge Analytica scandal fallout and other subsequent negative news stories, Stifel analyst Scott Devitt wrote in a note headlined “Facebook: digital tobacco” to clients last week — a statement echoed by Marc Benioff, co-chief executive of Salesforce.com Inc. CRM, -3.75% Devitt wrote that he is looking for relative stability in the U.S. and Canada, and expects to see daily users either grow or decline by about one million.

A torrent of negative news stories about Facebook’s effects on the world, as well as data and privacy concerns have had an impact on some advertisers, said Susquehanna Financial Group analyst Shyam Patil. Patril wrote that his team’s analysis suggested there were “pockets of softness in brand advertising” because big ad buyers were less willing to increase budgets.

Advertisers that rely on Facebook for direct response advertising reported little change in their approach to buying in the wake of the public relations issues the company has been dealing with. Patil has a buy on the company with a $250 price target. 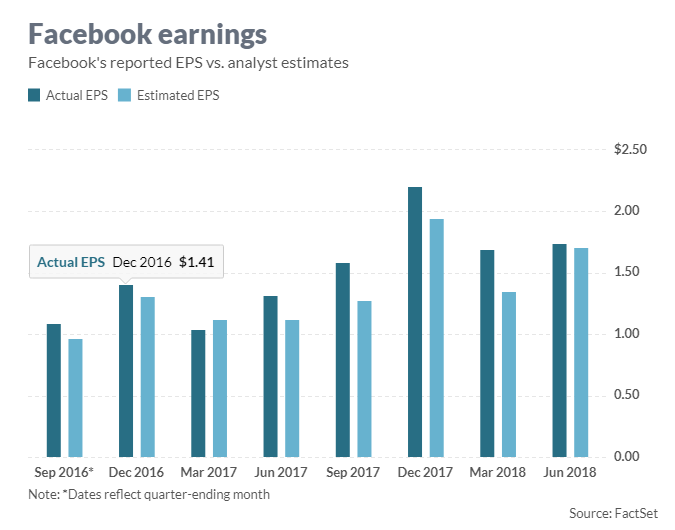 Earnings: On average, analysts polled by FactSet model third-quarter earnings of $1.46 a share, down from $1.59 in the year-ago quarter. Contributors to Estimize, which crowdsources estimates from analysts, fund managers and academics, predict earnings of $1.58 a share. 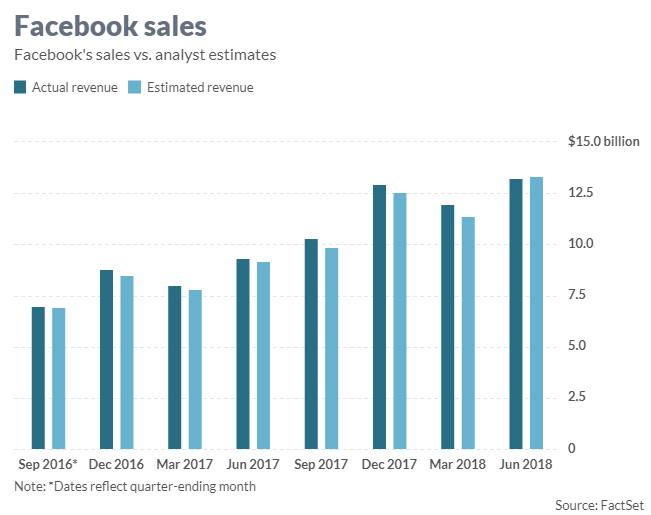 The vast majority of Facebook revenue is from mobile advertising, which analyst models suggest will account for $12.51 billion, and desktop ads will make up $1.18 billion. Analysts expect sales of $194 million for payments and other fees, a category that includes the company’s Oculus virtual-reality hardware sales.

On average, analysts expected Facebook to earn $6.09 per user during the quarter and grow its monthly active user base to 2.29 billion. 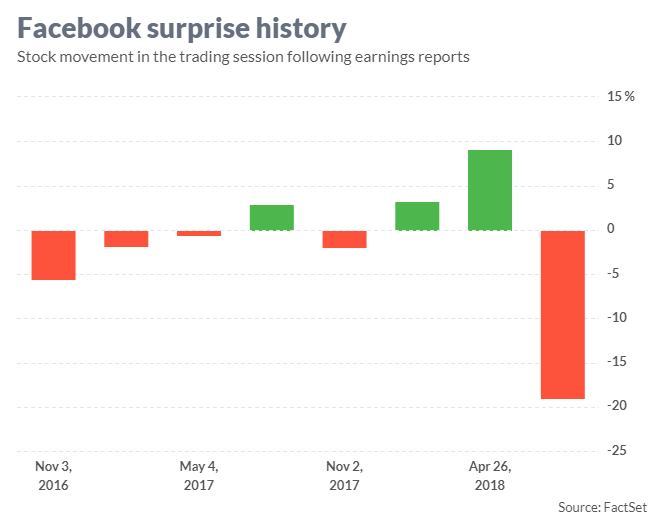 Stock movement: Facebook stock has declined 17.6% this year as of Friday’s close, while the S&P 500 SPX, -1.73% has dropped 0.6%. Of the 49 sell-side analysts that cover Facebook, 42 have the equivalent of a buy rating, six rate it a hold and one rates it a sell, according to FactSet. The average target price is $203.96, which is represents a 35% upside from Thursday’s close.

Barclays analyst Ross Sandler wrote in a note to clients earlier this month that his team has “heard some grumblings” from ad buyers — especially due to the political issues that Facebook has stepped into — and has caused some “hesitation” around budget decisions. But, advertisers did continue to report that Facebook ads are effective. Sandler has a $180 price target and rates the name a buy.

Yet, the Menlo Park, Calif.-based company’s platform remains massive and essential to most large-scale advertiser budgets, according to Pachter. Pointing out that Facebook has more than two billion monthly users, Instagram topped one billion as of June, Messenger with 1.3 billion and WhatsApp’s 1.5 billion, the company is poised to grow ad revenue in the long run, Pachter wrote.

Facebook’s average revenue per member in the U.S. and Canada is roughly fourfold what it makes from each account in the rest of the world, which Pachter says is reason enough to expect Facebook to squeeze more revenue out of every user overseas. Pachter rates Facebook the equivalent of a buy with a $250 price target and in a Friday note to clients Pachter said Facebook remains undervalued.

Stifel’s Devitt forecasts flat-to-down daily use in Europe, in part because of the EU’s General Data Protection Regulation, which includes privacy opt-ins that continue to weigh on the company’s user counts. If Europe recovers more quickly, it would be a “positive surprise,” he wrote.