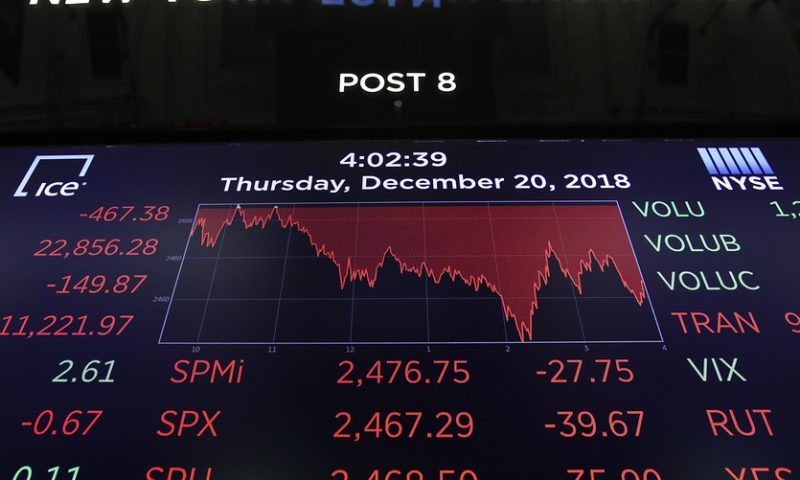 Edge of your seat or under your seat may both be good spots to watch the U.S.-China trade talk-show getting under way Thursday.

That’s judging by the stream of conflicting news reports that have been whipping markets around, such as one report saying the Chinese would bail early, briefly wiping 300 points off Dow futures late Wednesday. Wall Street shares are up in early trade on some promising trade headlines, but it’s early still.

And then earnings season kicks off next week with some big banks. Before you know it, we’re hitting the holidays and maybe some uneasy flashbacks to last year’s December stock meltdown.

A repeat of that rout may be unavoidable, warns our call of the day from Goldman Sachs alumnus Raoul Pal. “We’re coming into a period of illiquidity for equities,” the author of the Global Macro Investor newsletter, followed by the world’s biggest hedge funds, told MarketWatch in a recent interview.

He cites three reasons why a repeat of that stock selloff may be inevitable. The first is the blackout period for companies, which hits around earnings time when their share buy backs start to slow. Secondly, he notes that this year has also seen problems with the short-term borrowing market, or repo market, that the Federal Reserve has been trying to tackle. It could mean less buying from market makers — who help create liquidity for markets by bringing buyers and sellers together.

Pal says the third biggest issue facing stocks involves the baby boomers, Americans born between the mid 1940s and mid 1960s. They face an annual requirement to sell about 5% of their individual retirement accounts, loaded with stocks in some cases, as they reach 70.5 years old.

“The problem is the gap between this year and last year is huge. It’s like 50% increase in the amount of selling that has to be done,” said Pal, who was among the few investors who predicted and profited amid the 2008-09 mortgage meltdown. “They have to start selling by year-end. If you take out the Christmas week and you’re a financial adviser, and you want to get this done early, you will start in October.”

He blames boomer selling for part of the meltdown for stocks late last year. “The marginal change of an American baby boomer thinking ‘I’ve got too much equities,’ which they do have — that is catastrophic for the system, because they have way, way too much risk,” says Pal, co-founder of Real Vision financial television.

Our chart of the day shows investors headed for the sidelines in a big way ahead of U.S.-China trade talks. Vanguard’s S&P 500 exchange-traded fund VOO, +1.47% shows an outflow of $2.9 billion at the start of this week, marking the biggest withdrawal in the past 10 months, notes Naeem Aslam, chief market analyst at ThinkMarkets:

He adds that that’s the second-biggest withdrawal on record since the fund’s inception in September 2010:

Apple AAPL, +1.68% pulled an app that allowed Hong Kong protesters to track police, a day after being harshly criticized by a China state newspaper.

Blackouts, traffic jams and a rush to buy flashlights across Northern California as Pacific Gas & Power PCG, +11.81%  cuts power for a million people.

Data with the latest on jobless claims and consumer prices mostly met expectations.