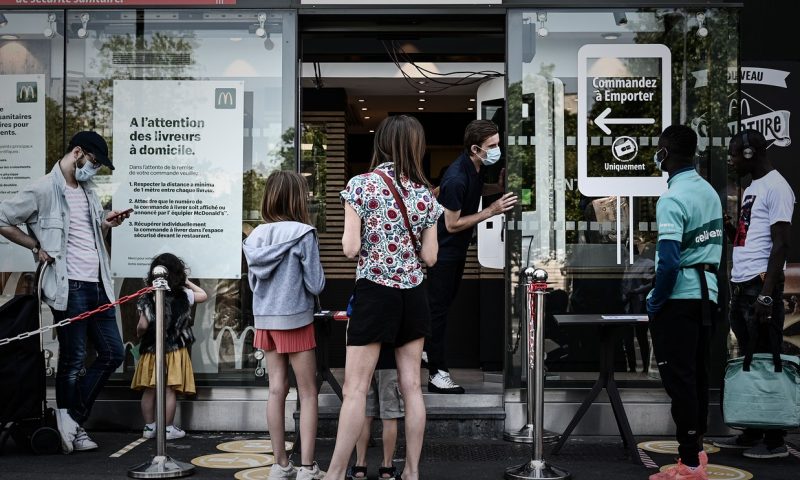 The tide may finally be turning for European stocks, thanks in part to the aggressive tactics of the European Central Bank and long-awaited follow-through on the fiscal side of the equation from eurozone governments, analysts say.

European equities have significantly underperformed their U.S. counterparts, including long-suffering small caps, over much of the past five years, defying repeated calls for a change in fortune. Europe’s stocks, however, could soon fulfil their promise as the ECB continues to hold down government bond yields and as European governments coalesce around plans for a fiscal boost, wrote analysts at Pavilion Global Markets, a Montreal-based macro research firm, in a Wednesday note.

“The choice between taking near-certain losses on negative-yielding debt or the attractive risk premiums on European stocks doesn’t seem to be much of a choice,” they wrote. “Investors are rotating out of bunds and into stocks.”

But it isn’t just about investors dumping negative-yielding European government bonds. Yields, while still negative, have lifted off of earlier lows in part due to a more optimistic economic outlook, the analysts noted. Instead, in a world “where central bank largesse seems certain, even if the strike price on their equity/credit puts is not, investors have little choice but to move into riskier assets,” they said.

Jens Nordvig, founder of Exante Data, noted via Twitter, that the outperformance since May 23, when German Chancellor Angela Merkel and French President Emmanuel Macron announced an agreement on a proposed €500 billion ($561.8 billion) European recovery fund — a plan that was upsized by the European Commission into a €750 billion proposal — “is starting to add up.”

Negotiations lie ahead on the recovery fund, but the move toward action on the fiscal side, led by Germany, marks an important shift. With fiscal policy makers finally responding to pleas for action, analysts expect the ECB on Thursday to take further steps of its own. In fact, since the recovery fund would mainly be effective in 2021, there remains pressure on the ECB to expand its €750 billion Pandemic Emergency Purchase Program. Analysts expect that to happen when the Governing Council meets Thursday. If not, markets might be disappointed.

Meanwhile, the Pavilion analysts argued that the equity risk premium — in this case measured as the expected earnings yield (the inverse of the price/earnings ratio) minus the risk-free rate (the yield on the 10-year Treasury note for U.S. stocks, the bund for European stocks) — favors European stocks over U.S. equities, particularly small caps, as measured by the Russell 2000 RUT, +2.38% , which has enjoyed a resurgence of its own in recent sessions.

While Europe has plenty of problems, there’s a relative-value opportunity in going long European stocks and short U.S. small caps, they said.

The Russell is up 4.4% in the week to date. But the Pavilion analysts argued that the Russell remains weighed with highly indebted “zombie” companies that are likely to be a drag on performance. Meanwhile, the outlook for “risk sentiment” in Europe appears, for the first time in a long time, more upbeat in Europe than across the Atlantic.

“The U.S is oscillating between social distancing and rioting, while President Trump is upping the rhetoric against China, and facing an election schedule that makes working across the political aisle more difficult,” they said. “In contrast, Europe is emerging from the COVID-19 lockdown, and, oddly, there is growing broad political support for more fiscal spending, which should help put a floor under economic conditions.”