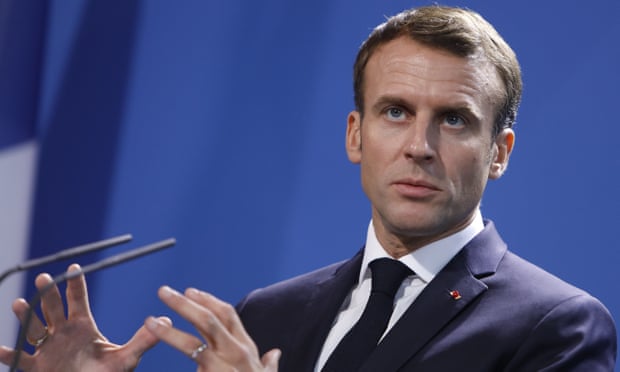 The French president, Emmanuel Macron. has said there is a need for a stronger Europe to prevent the world “slipping into chaos”. Giving a speech in the Bundestag in Berlin, Macron made a plea to the German chancellor, Angela Merkel, to support a range of reforms to strengthen Europe.

“Europe and, within it, the Franco-German couple have the obligation not to let the world slip into chaos and to guide it on the road to peace,” Macron told the German parliament. “That’s why Europe must be stronger… and win more sovereignty.”

The speech at a ceremony to commemorate the victims of war and dictatorships was the latest in a number of moves designed to demonstrate a joint front between France and Germany. The traditionally strong relationship has improved in response to threats to European unity, including Brexit and Donald Trump, who has made no secret of his antagonism towards the EU.

Macron, the first French president to address the Bundestag in 18 years, called for greater European unity in order for the bloc to meet future challenges in an uncertain world. He said Europe must not “become a plaything of great powers, must assume greater responsibility for its security and its defence, and must not accept a subordinate role in world politics”.

Merkel said she agreed with Macron’s assessment that Europe stood “at a crossroads”, before the two headed into a meeting to discuss a range of policy challenges.

The pair appear to have a warm personal relationship, as well as a shared sense of history, demonstrated last week in joint appearances at events to remember the 100th anniversary of the Armistice.

However, that has not translated into much momentum behind a policy agenda. The two countries remain far apart on key points, from reforming the eurozone to curbing the influence of internet companies through a digital tax.

While France and Germany agree on strengthening European defence, differences have emerged in their response to plans for EU joint forces to respond to natural disasters or crisis intervention. France had sought the widest possible mandate for EU joint forces, while Germany wanted EU military cooperation to involve as many countries as possible, even if that meant scaling back ambition.

Merkel said last week that European leaders should one day consider “a real true European army” after Trump ramped up his attack on Macron with a string of insulting tweets for proposing the same idea. But Germany’s idea of “a European army” falls well short of a single command force controlled by EU authorities in Brussels. Writing in the Frankfurter Allgemeine Zeitung, Germany’s defence minister, Ursula Von Der Leyen, suggested that the German military should do more joint operations with other European forces, but it would remain under the control of the German parliament.

France’s minister for European affairs, Nathalie Loiseau, told the Journal du Dimanche: “It is not a question of being against the United States, but of taking our destiny into our own hands to no longer count on others.”

Split on future of WTO