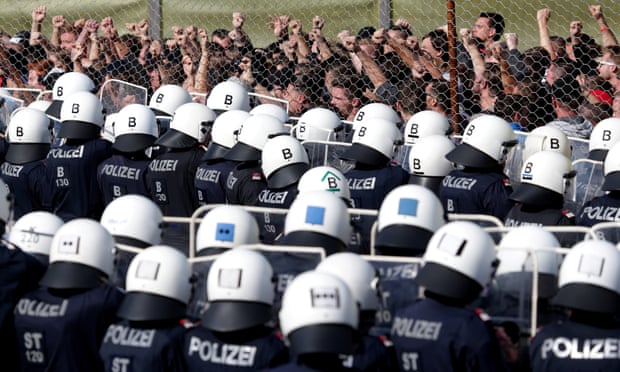 Brussels has spoken out against Austria’s decision to join Hungary in not signing a UN global migration pact approved by most countries.

The rightwing government in Vienna announced on Wednesday that it would not agree to the global compact on migration because it feared this would lead to “a human right to migration”, a claim dismissed by the UN.

Hungary and the US have already withdrawn from the compact, while Poland is considering not signing the accord.

A European commission spokeswoman said: “We regret the decision that the Austrian government has taken. We continue to believe that migration is a global challenge where only global solutions and global responsibility sharing will bring results.”

Austria had played “an extremely constructive and key role” in the negotiations, she added.

On Thursday Prime Minister Andrej Babiš said he wanted to stop the Czech Republic joining the pact, arguing that the difference between legal and illegal migration was becoming blurred. “I will be proposing to my partners in government that we act in the same way as Austria or Hungary,” he told lawmakers, according to a parliamentary transcript.

The Visegrad countries in central Europe (Poland, Hungary, the Czech Republic and Slovakia) have clashed with the EU over mandatory refugee quotas.

The Austrian government, a coalition between the conservative People’s party and the far-right Freedom party, believes the pact mixes up the rights of asylum seekers with those of economic migrants.

The cabinet agreed to argue against any attempt to establish a human right to migration.

Louise Arbour, the UN special representative for international migration, said: “The question of whether this is an invidious way to start promoting a ‘human right to migrate’ is not correct. It’s not in the text; there’s no sinister project to advance that.”

She described the decision as regrettable and said the compact aimed to improve the management of cross-border movements of people.

The compact, which is non-binding, states that nations have the sovereign right to “determine their national migration policy and their prerogative to govern migration within their jurisdiction”. It adds: “Within their sovereign jurisdiction, states may distinguish between regular and irregular migration status.”

The Austrian government was elected last year, following a backlash against the arrival of 1.2 million asylum seekers in the EU, many fleeing conflict in the Middle East. During the migration crisis of 2015, more than 90,000 people applied for asylum in Austria, more per capita than any other EU member state.

Austria, which holds the EU rotating presidency, has faced questions as to whether its hardline stance on migration undermines its role as an honest broker in steering the EU towards a compromise on migration.

The chancellor, Sebastian Kurz, and the Hungarian prime minister, Viktor Orbán, have led calls for tougher border security and creating offshore processing centres for migration – ideas that have caught on.

The EU wants north African countries to take more people rescued from the central Mediterranean, although progress in setting up these “disembarkation platforms” has been scant. An Austrian idea of migration processing camps in Albania has faced opposition.