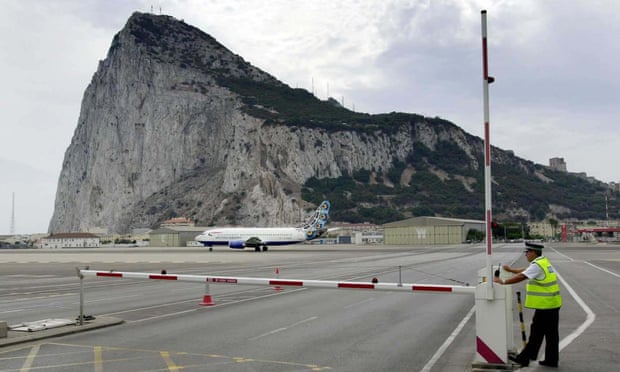 The British government has expressed anger after the EU offered tentative support for Spain’s territorial claim over the land on which Gibraltar airport is built.

Direct flights between the UK and EU destinations will continue to operate for nine months in the event of a no-deal Brexit under contingency plans agreed by Brussels.

Gibraltar airport, however, is not included in the scope of the plans, and EU legislation on the issue includes reference to Spain’s claim to land on which it is built.

Gibraltar’s territory includes an 800m isthmus with mainland Spain, on which two housing estates and the airport are located, but Madrid does not acknowledge Britain’s sovereignty over the strip.

The Treaty of Utrecht, under which Spain ceded Gibraltar to the UK, does not refer to British sovereignty beyond the fortified perimeter of the town as it was in 1713. The UK says it has rights through continuous use of the land.

The EU’s no-deal legislation notes that the regulation is “without prejudice” to the “position of the Kingdom of Spain with regard to the sovereignty over the territory in which the airport of Gibraltar is situated”, and fails to mention the UK’s rival claim.Advertisement

The UK’s deputy ambassador to the EU, Katrina Williams,, has made a formal statement rejecting the language used in the EU’s legislation, complaining that both the Spanish and British claims over the territory should have been cited as both states are currently EU members.

The UK’s statement “reiterates certainty over its sovereignty over Gibraltar, including the territory in which Gibraltar airport is situated”, and says the UK government is “adamant that, as this measure will be adopted while the UK is still a member state, the legal position of the UK should be reflected”.

The British government also made clear “its regret that Gibraltar has not been included in the scope of this measure and reiterates its intention that, when it comes to the future relationship with the EU, it will negotiate on behalf of the entire UK family, including its overseas territories”.

EU sources said the UK needed to realise that the decision to leave would have repercussions. They pointed out that the UK made Spain “swallow” the British position on Gibraltar when the country sought to join the then European economic community in 1984, even threatening to veto it if Madrid failed to reopen the land border.

A British government spokesman said the practical impact was limited, because there were no flights between Gibraltar and EU destinations other than the UK.

The spokesman said: “We welcome the substance of this proposal, which will ensure that flights between the UK and EU continue in a no-deal scenario, helping minimise disruption to citizens and businesses. The UK will reciprocate and provide, as a minimum, equivalent rights to airlines from those European states.

“However, we disagree with the language inserted by Spain in relation to sovereignty over the land on which the airport is built as it does not recognise the UK’s position on sovereignty.

“We are certain of our sovereignty over the whole of Gibraltar. We are also disappointed that the text that will go forward for adoption does not cover Gibraltar.”

The issue of Gibraltar also continues to hold up visa-free travel for British nationals in the event of a no-deal Brexit. The European parliament is blocking the regulation because it currently describes Gibraltar as a colony, a contentious term for the British government and others.