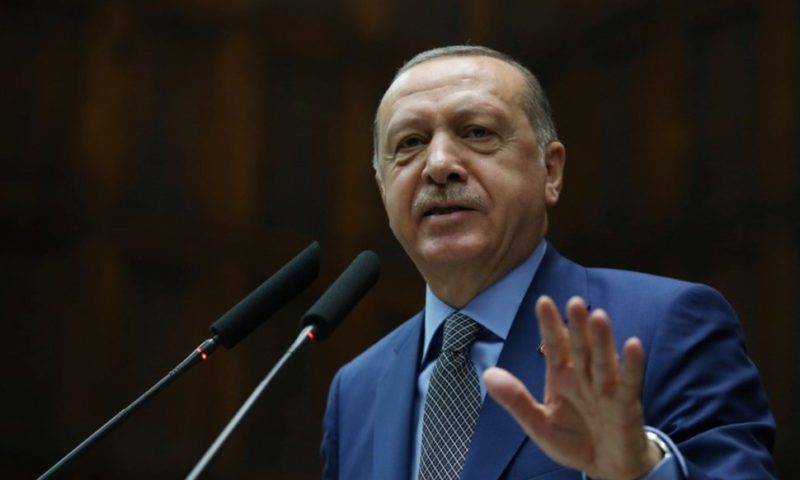 ISTANBUL – President Tayyip Erdogan said on Saturday he and President Donald Trump had discussed Turkey’s Halkbank, which faces potential U.S. fines after an executive was convicted of taking part in a scheme to help Iran evade U.S. sanctions.

Erdogan gave few details but his comments come amid indications that Washington and Ankara are trying to mend relations which plunged into crisis this year, and he welcomed what he said was the start of negotiations over the bank.

Turkey’s state-owned Halkbank has been one of the main points of disagreement between the two NATO allies, who are also at odds over policy in Syria and Turkey’s purchase of a Russian missile defense system.

A U.S. court in May jailed a Halkbank executive for helping Tehran get round U.S. sanctions. The U.S. Treasury is also considering a fine against the bank.

Halkbank denies any wrongdoing and Erdogan has condemned the court case as a political attack on his government. Treasury and Finance Minister Berat Albayrak told Reuters in September he did not expect the bank to face a fine.

The Turkish president said he and Trump discussed Halkbank in a call on Thursday and the U.S. president told him “he would instruct the relevant ministers immediately”, without specifying what the president had promised to do. He said U.S. officials called Turkey’s Treasury and Finance Minister the next day.

“Talks are underway about this issue. It is very important that this process has begun,” Erdogan told a news conference in Istanbul.

Last month a Turkish court freed a U.S. evangelical pastor who had been in jail and under house arrest for two years while he faced trial on terrorism charges.

On Thursday, after weeks of delay, the two countries started joint patrols near the northern Syrian town of Manbij under an agreement aimed at avoiding direct confrontation. U.S. troops are supporting Kurdish YPG forces in northern Syria, while Turkey has promised to drive the YPG from its southern border.

Erdogan said he would meet Trump next week in France, where the two leaders are due to attend ceremonies marking the centenary of the end of World War One.

‘Canada is the most multicultural country in the world’