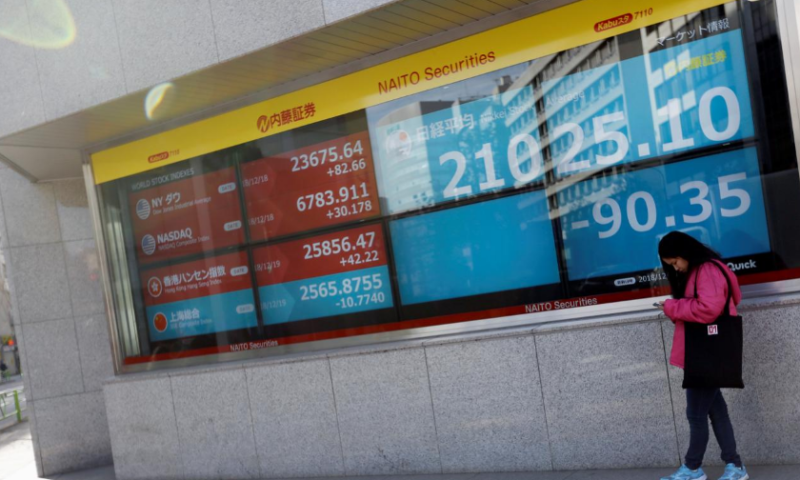 NEW YORK – World equity markets continued a week-long slide on Thursday, one day after the U.S. Federal Reserve indicated it was set on its path to hike interest rates next year despite signs that global economic growth is stuttering.

The Fed’s move on Wednesday largely to adhere to its plan for additional rate hikes over the next two years raised worries for market participants from Asia to Europe, and major indexes fell to their lowest in two years as investors flocked to the relative safety of government debt.

European shares fell nearly 1.5 percent on Thursday, with benchmark indexes in Germany, Britain and France all hitting their lowest since late 2016. Indexes in Japan and South Korea fell into a bear market, defined as a 20 percent decline from recent highs, joining benchmark indexes in Shanghai and Hong Kong.

MSCI’s global equity index fell to its lowest since May 2017, shedding nearly 1.5 percent as it headed for a fifth straight day of losses.

“All people are talking about today is the aftermath of the Fed hike. The Fed just killed the notion that they are here to backstop the market,” said Michael Antonelli, managing director, institutional sales trading at Robert W. Baird in Milwaukee.

The Fed on Wednesday stuck by a plan to keep withdrawing support from an economy it considers robust raised key overnight lending rates as expected by 0.25 percentage point.

It said “some further gradual” rate hikes would be needed in the year ahead, with policymakers projecting two rises on average next year instead of the three predicted in September.

Although largely in line with expectations, that tweak did little to soothe investor concerns over slowing world growth, U.S. trade tensions with China and tightening monetary conditions for companies in the world’s biggest economy.

The equity losses added to the worst year for world stock markets since the 2008 global financial crisis, with MSCI’s 47-country world stocks index down 10 percent.

Nearly $7 trillion has been wiped off global stock markets this year, with emerging markets trampled flat by a charging dollar.

The angst in equity markets pushed investors toward the safety of government bonds.

Oil prices, meanwhile, slumped as worries about oversupply and worldwide demand for energy pushed prices back toward their lowest in over a year. U.S. crude fell more than 4 percent to $46.14 per barrel, while Brent fell 4.1 percent to $54.87 per barrel.

“Growth concerns continue to percolate in the background, and you can see that with oil prices coming off,” said Alvin Tan, a foreign exchange strategist at Societe Generale.