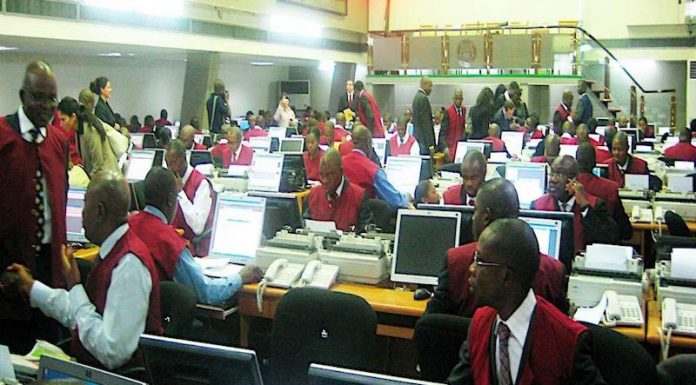 Stoked by political concerns, weak investor sentiments toward frontier and emerging markets, the Nigerian equities market recorded another decline last week. As a result, the Nigerian bourse’s year-to-date decline worsened to 15.5 per cent.

Specifically, the Nigerian Stock Exchange All-Share Index (NSE ASI) fell by 5.02 per cent to close at 32,327.59, while market capitalisation ended lower at N11.802 trillion. Similarly, all other indices finished lower with the exception of the NSE ASeM Index that closed flat. This is the worst weekly decline this year.

According to analysts at Afrinvest, since the bear run started at the tail end of January, the Nigerian market has lost 27.3 per cent, which is one of the worst performing within this period, globally.

“With no fundamental driver to boost investor sentiment on the horizon, we believe the current weak performance will persist, although we expect speculative trading to shape activities pending the completion of the general elections in 2019,” they said.

The Nigerian equities market slumped to 15-month low on the first day of last week on continuing bear run. The NSE ASI fell 1.25 per cent to close at 33,611.69, while market capitalisation shed N155.6 billion to close at N12.27 trillion.

Some market analysts said investors should trade cautiously in the short to medium term, as selloffs are likely to persist, amidst the brewing political uncertainty, and the absence of a one-off positive trigger.

Others noted that they envisage a negative close to the market this week due to continued sell offs, in the absence of any significant market information to sway the market the other way.

In all, 21 stocks depreciated compared with 11 others that depreciated. Nestle Nigeria Plc led the price losers with 9.6 per cent trailed by Forte Oil Plc with 9.2 per cent, while Regency Alliance Insurance Plc with 8.7 per cent.

On the positive side, SUNU Assurance Plc led the price gainers with 10 per cent, trailed by Union Diagnostic and Clinical Services Plc (7.4 per cent); Honeywell Flour Mills Plc (5.5 per cent) and University Press Plc (4.1 per cent) and Mutual Benefits Assurance Plc (3.7 per cent).

The market dipped further on Tuesday following losses by bellwether counters. Consequently, the NSE ASI which had hit a-15 month low on Monday, went down by another 0.48 per cent to close lower at 33,449.17, while market capitalisation shed N59.3 billion to close at N12.2 trillion.

However, the decline in the index resulted majorly from losses suffered by bellwether tickers such as Zenith Bank, GTBank, UBA, and Nigerian Breweries Plc among others.

Dangote Sugar Refinery Plc led the price losers and NAHCO Plc with 10 apiece. Universal Insurance Plc and Sunu Assurance Plc trailed with 9.0 per cent each. Japaul Oil and Maritime Services Plc and Consolidated Hallmark Insurance Plc went down by 8.3 per cent and 7.8 per cent respectively.

Regency Alliance Insurance Plc chalked up 9.5 per cent, while Neimeth International Pharmaceuticals Plc garnered 9.0 per cent. Learn Africa Plc, Dangote Flour Mills Plc, WAPIC Insurance Plc went up by 8.9 per cent, 7.0 per cent and 5.1 per cent in that order.

In terms of sectoral performance, the NSE Banking Index led the bears, sliding by 3.0 per cent due to continuous selloffs in GTBank, Zenith Bank and UBA. The NSE Insurance Index shed 0.9 per cent, while the NSE Oil & Gas Index fell by 0.8 per cent.

Wednesday was a real red day as the market recorded its biggest daily loss in eight months following continued sell-offs in big counters. The NSE ASI went down by 3.46 per cent to close at 32,292.79, while market capitalisation shed N422.2 billion to close N11.8 trillion.

According to analysts at Meristem Securities Limited, significant selloffs on top counters across all sectors today dragged market performance.

“Weak investor sentiment was adequately captured by a poor market breadth of 0.30x, as investors flee the Nigerian bourse. We do not expect a deviation from this trend in the remaining trading days this week, implying a negative close to the market this week,” they said.

From every indication, investors are ignoring strong fundamentals of some of the stocks and continued to exit due to their apprehension over the current political situation.

Analysts at Afrinvest (W.A) had said the bear run had made some stocks in the banking, consumer goods and industrial goods sectors to be attractive. In the banking sector, for instance, the said United Bank for Africa Plc has upside potential of 56 per cent and Zenith Bank Plc 52 per cent. GTBank Plc has 27 per cent growth potential, while Access Bank Plc has 11.3 per cent.

Although the market remained bearish on Thursday, some banking stocks defied the bears to the nine price gainers for that day. Skye Bank Plc recordd the highest appreciation of 9.8 per cent. Unity Bank Plc trailed with 8.9 per cent, while Wema Bank Plc and Fidelity Bank Plc added 3.3 per cent apiece. United Bank for Africa Plc and Guaranty Trust Bank Plc appreciated by 1.4 per cent and 1.0 per cent respectively. The non-banking stocks that appreciated for the day were Transcorp Plc (4.6 per cent); LASACO Assurance Plc (3.3 per cent) and Nigerian Breweries Plc (0.12 per cent).

Market analysts said :“The absence of a one-off positive trigger and political jitters ahead of the 2019 elections, guide our conservative outlook for equities in the short to medium term. However, stable macroeconomic fundamentals remain supportive of recovery in the long term.”

The market recovered part of losses recorded early in the week on Friday as bargain hunters swooped on stocks. The NSE ASI appreciated by 0.95 to close at 32,327.59. However, the gain was not enough to offset the earlier losses. Consequently the market closed the week with a decline of 5.02 per cent.

Meanwhile, only 13 stocks appreciated, lower than 33 in the previous week, while 58 equities depreciated in price, higher than 39 equities of the previous week. Law Union and Rock Insurance Plc led the price losers with 18.5 per cent, trailed by Unity Bank Plc with 17.7 per cent, while Skye Bank Plc shed 15.5 per cent.

Union Diagnostic & Clinical Services Plc chalked up 11.1 per cent, while Learn Africa Plc and Wema Bank Plc appreciated by 8.9 per cent and 5.2 per cent respectively.

Conversely, Cement Company of Northern Nigeria Plc led the price losers for the week with 26.8 per cent, followed by Universal Insurance Plc that chalked up 24.2 per cent. Forte Oil Plc and Consolidated Hallmark Insurance Plc and Linkage Assurance Plc shed 15.7 per cent apiece.

Niger Insurance Plc went down by 15.3 per cent, while Access Bank Plc and Standard Alliance Insurance Plc depreciated by 13.8 per cent and 13.7 per cent in that order. Dangote Sugar Refinery Plc and Flour Mills of Nigeria Plc lost 13.1 per cent and 11.6 per cent respectively.