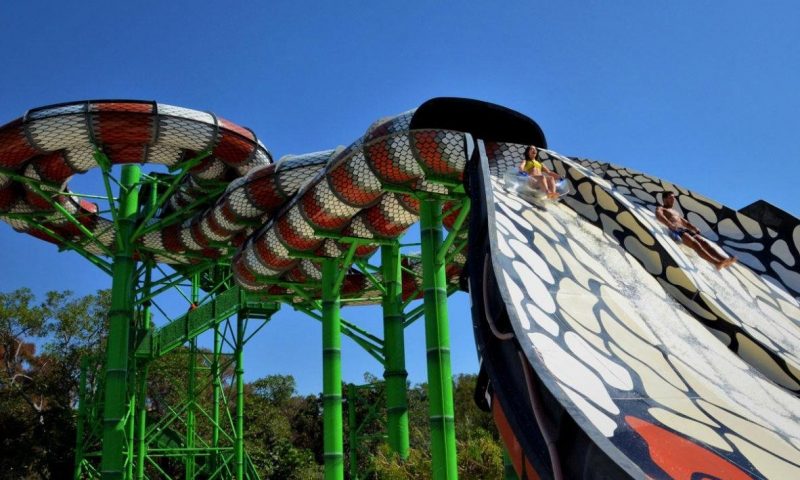 Six Flags Entertainment Corp (NYSE:SIX) – Stock analysts at B. Riley dropped their Q1 2020 earnings per share (EPS) estimates for Six Flags Entertainment in a research report issued on Thursday, April 25th, Zacks Investment Research reports. B. Riley analyst E. Wold now anticipates that the company will post earnings per share of ($0.85) for the quarter, down from their prior estimate of ($0.83). B. Riley has a “Buy” rating and a $57.00 price objective on the stock.

Six Flags Entertainment (NYSE:SIX) last posted its quarterly earnings results on Tuesday, April 23rd. The company reported ($0.82) EPS for the quarter, beating the consensus estimate of ($0.86) by $0.04. Six Flags Entertainment had a net margin of 18.40% and a negative return on equity of 41.58%. The business had revenue of $128.19 million during the quarter, compared to analyst estimates of $123.63 million. During the same quarter in the previous year, the business posted ($0.74) EPS. The company’s quarterly revenue was down .6% compared to the same quarter last year.

In other news, CFO Marshall Barber sold 1,275 shares of Six Flags Entertainment stock in a transaction that occurred on Friday, February 22nd. The shares were sold at an average price of $56.48, for a total value of $72,012.00. Following the transaction, the chief financial officer now owns 82,722 shares of the company’s stock, valued at approximately $4,672,138.56. The sale was disclosed in a legal filing with the SEC, which can be accessed through this link. Also, Director Usman Nabi bought 5,000 shares of the company’s stock in a transaction on Friday, March 8th. The shares were bought at an average cost of $50.77 per share, for a total transaction of $253,850.00. Following the transaction, the director now owns 7,520 shares in the company, valued at approximately $381,790.40. The disclosure for this purchase can be found here. 5.90% of the stock is owned by insiders.

The company also recently disclosed a quarterly dividend, which will be paid on Monday, June 10th. Stockholders of record on Thursday, May 30th will be given a $0.82 dividend. This represents a $3.28 dividend on an annualized basis and a dividend yield of 6.35%. The ex-dividend date of this dividend is Wednesday, May 29th. Six Flags Entertainment’s payout ratio is currently 101.55%.