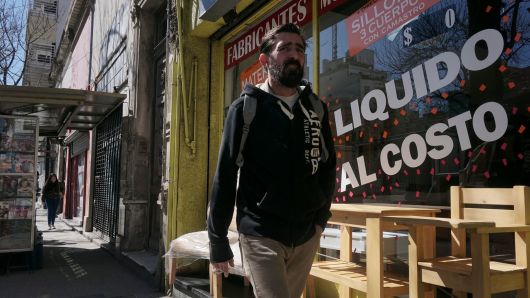 The iShares MSCI Emerging Markets exchange-traded fund (EEM) fell as much as 0.6 percent on Thursday, bringing the decline from its all time high reached in January of this year to more than 20 percent. The fund managed to claw back from Thursday’s lows to close 0.1 percent higher, however.

ETFs that track Brazilian, Argentine, Turkish and Chinese stocks are also in bear-market territory. Turkish stocks are down more than 56 percent from their 52-week high, while Brazilian and Argentine stocks are both trading more than 30 percent below that mark. The iShares China Large-Cap ETF (FXI) is down about 24 percent from its one-year high.

EM getting hammered: Turkey, Brazil, Argentina and China all in bear-market territory
Values in percentage. 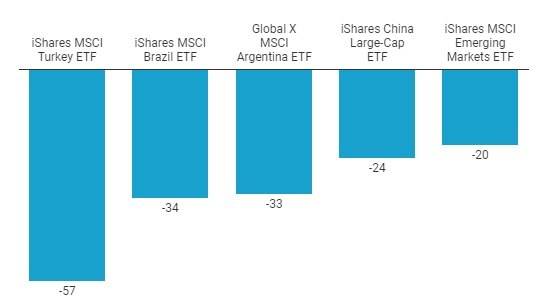 The Federal Reserve continues to raise rates, tightening monetary policy and boosting the U.S. dollar. Several emerging market economies have lots of dollar-denominated debt, so a stronger dollar makes it harder for these countries to repay it. A stronger dollar also makes it harder for emerging markets to buy commodities, most of which are bought and sold in the U.S. currency.

“This remains the key. As long as global [central banks] insist on reducing liquidity while simultaneously attempting to raise cost of capital, victims would continue to float to the surface, starting with weaker players but then gradually spreading to the sturdier corners,” said Viktor Shvets, head of Asian equity strategy at Macquarie, in a note.

The Fed has raised rates twice this year and is expected to hike two more times before the end of 2018.

At the same time, tensions between the U.S. and some of its key trade partners have increased recently. The Trump administration is expected to slap tariffs on an additional $200 billion in Chinese goods after midnight, which is the deadline to receive commentary on the proposed levies. China has also threatened to retaliate with additional tariffs of its own.

Meanwhile, Canadian officials meet with their U.S. counterparts to try and join a bilateral trade deal struck between the United States and Mexico on Aug. 27. The new trade deal would replace the North American Free Trade Agreement (NAFTA), which includes the U.S. Canada and Mexico. NAFTA has been heavily criticized by U.S. President Donald Trump, who has called it the worst trade deal ever. These negotiations also come after the U.S. has slapped tariffs on Mexican and Canadian imports, to which both countries have retaliated.

The Trump administration’s protectionist trade policies have sent shock waves through emerging markets as most of those economies are export-driven. Tighter trade conditions hurt such economies.

Through July, Argentina’s inflation rate is up more than 30 percent on a year-over-year basis. Argentina’s central bank has tried to keep inflation in check through rate hikes, but to no avail. Last week, they raised the overnight rate to 60 percent, the highest in the world.

In Turkey, the lira hit a record low against the dollar in August after Trump doubled tariffs on Turkish steel and aluminum imports. It has lost at least 40 percent of its value against the dollar this year as President Recep Tayyip Erdogan has pressured the country’s central bank to keep interest rates low. The central bank, however, vowed to contain the country’s rampant inflation.

“The challenge with Turkey and Argentina is not only that these two economies have unsustainable twin deficits and suffer from massively rising inflationary pressures, but also that their responses thus far were either slow or hostile,” Macquarie’s Shvets writes. “In reality both face politically unpalatable choice of either deep recession or some form of capital controls & debt renegotiation.”

Wall Street drops on tariff worries, with Apple in crosshairs