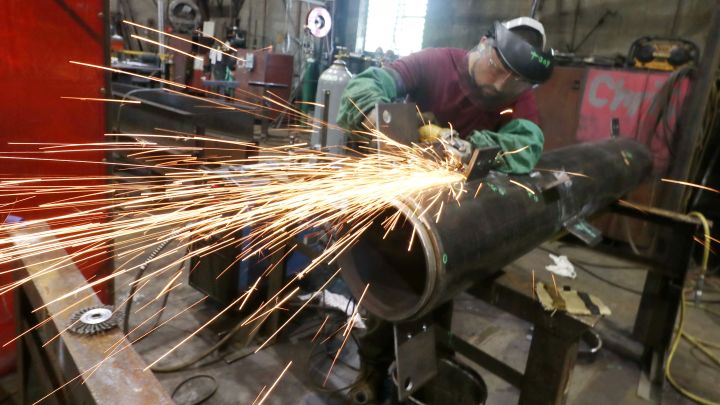 Long-awaited wage growth posted its biggest increase of the economic recovery in August while payroll gains beat expectations and the unemployment rate held near a generational low of 3.9 percent, according to a Bureau of Labor Statistics report Friday.

Average hourly earnings rose 2.9 percent for the month on an annualized basis, while nonfarm payrolls grew by 201,000. Economists had been expecting earnings to rise 2.7 percent, payrolls to increase by 191,000 and the jobless level to decline one-tenth of a point to 3.8 percent.

The wage growth was the highest since April 2009.

“If we continue to see wage growth move higher, it puts the Fed in play for a fourth rate hike, absent tariff concerns,” said Quincy Krosby, chief market strategist at Prudential Financial. “I don’t think this is going to be the beginning of a downturn in the market, but the fact is there had been other reports leading up to this suggesting wages had been moving higher. Today’s print is indicative of a tight labor market.” 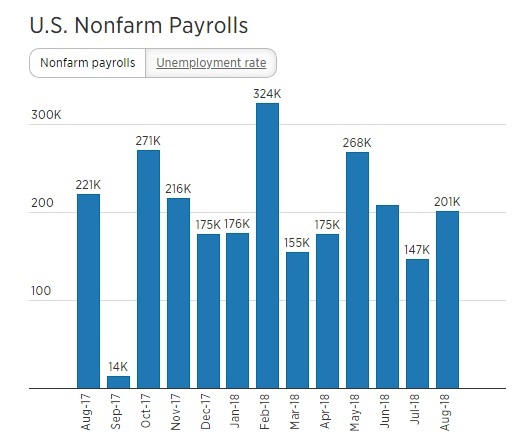 Yields jumped after the numbers were released and stocks were mixed on expectations the data justified more rate hikes from the Federal Reserve.

A broader measure of unemployment that takes into account discouraged workers and those at jobs part time for economic reasons edged lower, from 7.5 percent to 7.4 percent.

The report overall “serves as a capstone to one of the greatest labor market recovery periods of all time, with the economy creating new jobs in an impressive manner, and wage rates finally rising nicely,” Rick Rieder, BlackRock’s chief investment officer of global fixed income, said in a note.

The biggest contributor to job gains was professional and business services, which added 53,000. Heath care grew by 33,000, wholesale trade rose by 22,000, and transportation and warehousing contributed 20,000 to the total.

There also were 6,000 new mining jobs in a profession that has added 104,000 positions since October 2016, primarily in support activities.

Average hourly earnings increased 10 cents for the month to $27.16. The metric is closely watched as an inflation gauge at a time when the Federal Reserve has been raising interest rates in part to guard against runaway cost pressures. Market participants widely expect the Fed to hike its benchmark rate another quarter point in September and likely add one more increase in December.

Friday’s wage report likely will only encourage the central bank in its quest to normalize policy after years of accommodation during and after the financial crisis.

There were other pockets of weakness, though, in the report.

According to the household survey, the ranks of the employed slumped by 423,000 to 155.5 million. At the same time, the rolls of those at work part time for economic reasons, or the underemployed, fell by 188,000 to 4.4 million. That number has declined by 830,000 over the past year.

The big moves, though, could have been caused by seasonal distortions that are common in August.