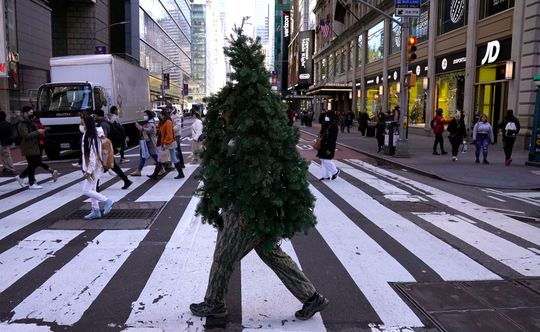 ‘The California and San Francisco departments of public health and the CDC have confirmed that a recent case of COVID-19 among an individual in California was caused by the omicron variant,’ Fauci says

The U.S. stock market started December the same way it ended November, with a whipsaw trading session that saw the Dow Jones Industrial Average swing by nearly 1,000 points from peak to trough, ushering in an unsettling phase of volatility in the final month of 2021.

How are stock-index futures trading?

Equity indexes squandered what had been shaping up to be a solid rebound, falling after Dr. Anthony Fauci, President Joe Biden’s top medical adviser, said the U.S. confirmed its first case of the omicron variant of the coronavirus that causes COVID-19.

The comments come a day after the market swooned on a combination of hawkish comments from Federal Reserve Chairman Jerome Powell and worries surrounding the new strain of coronavirus that has been rattling investors.

Fauci said that “the California and San Francisco departments of public health and the CDC have confirmed that a recent case of COVID-19 among an individual in California was caused by the omicron variant.”

Although the eventual emergence of a U.S. case was widely expected, comments from the public health specialist took the wind out of the market’s sails, which had enjoyed a decidedly more optimistic tone earlier on Wednesday.

Investors had even shrugged off Powell’s latest remarks, after he reiterated his view that the central bank might have to tighten financial conditions soon to combat surging inflation from new variants of COVID such as omicron, testifying for a second day in front of lawmakers about the state of the economy in the face of the COVID-19 pandemic. Powell tempered his remarks by saying that “the taper need not be a disruptive event in markets, I don’t expect that it will be. It hasn’t been so far — we telegraphed it.”

Markets appeared to be in a more sanguine mood even before Powell’s Wednesday testimony, as investors parsed private payrolls in the U.S., which rose by 534,000 in November, according to the ADP National Employment Report released Wednesday. Economists polled by The Wall Street Journal had forecast a gain of 506,000 private-sector jobs in November.

The ADP results come ahead of the closely watched November payrolls data that will be released Friday.

Tuesday’s downturn also was precipitated by comments from Moderna  MRNA CEO Stéphane Bancel, who expressed doubts about extant vaccines against the omicron variant, which the World Health Organization on Friday designated as a variant of concern because they fear it may be more transmissible and harder to immunize against due to the mutations in its so-called spike protein.

Analysts said investors will remain laser focused on updates over the omicron variant, with data expected over the next two weeks or so.

“While Powell decided to retire the phrase transitory when discussing inflation, the fact is that this latest variant runs the risk of ensuring this current hawkish tone is in itself somewhat temporary in nature,” said Joshua Mahony, senior market analyst at IG, in a note to clients.

“With the risk of future lockdowns and economic closures, comments from the Fed and [Bank of England] should be taken with a pinch of salt given how much they could change once we find out the full extent of this variant,” said Mahony.

The U.S. is reportedly set to announce further travel restrictions this week, among them a requirement that all incoming air travelers be tested for COVID within a day of their flight. Details are being completed ahead of a planned speech from President Joe Biden on Thursday, where he is expected to detail the country’s plan to control the pandemic this winter.

In other economic data, a closely followed index of U.S.-based manufacturers rose to 61.1 in November from 60.8 in the prior month, the Institute for Supply Management said Wednesday. That matched the forecast of economists polled by The Wall Street Journal. Any number above 50 signifies growth. A separate reading from IHS Markit showed that November U.S. manufacturing PMI dropped to 58.4 vs initial 59.1.

Meanwhile, the Fed’s latest Beige Book compilation released Wednesday showed that while the economy was growing at a moderate pace in November, businesses were raising price at a rapid clip across a swath of the economy.

“Prices rose at a moderate to robust pace, with price hikes widespread across sectors of the economy,” the survey found.