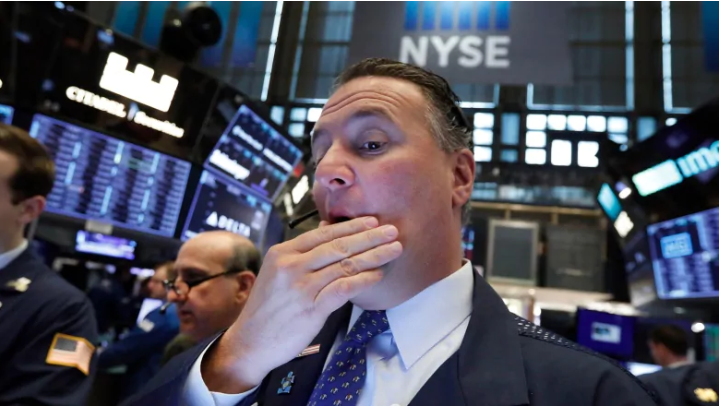 TSX falls more modestly as oil prices rise after attack on oil vessels, then fall on fears of slowdown

Wall Street’s main indexes fell sharply Monday after Beijing announced plans to retaliate against the U.S. with higher tariffs on U.S. goods, raising fears that another round of tit-for-tat measures could push the U.S. economy toward recession.

The S&P 500 on Friday racked up its worst weekly decline since December, as Washington raised tariffs on Chinese goods worth $200 billion to 25 per cent from 10 per cent.

The trade war worsened Monday, as China’s finance ministry said it planned to impose tariffs ranging from five to 25 per cent on 5,140 U.S. products on a target list worth about $60 billion starting June 1.

Toronto’s S&P/TSX index fell in tandem with global markets for a third day of losses. At the close it was down 104 points to 16,193. The fall in the TSX was checked by an uptick in oil prices.

Two Saudi oil tankers and two other oil product vessels were attacked off the coast of the United Arab Emirates in what Saudi Arabia described it as an attempt to undermine the security of crude supplies amid tensions between the United States and Iran.

The benchmark North American contract rose sharply to $62.97 US a barrel as a result, but by the close was down 85 cents to $60.81 US a barrel. That drop was cause by fears of a global economic slowdown.

Western Canada Select, the main Canadian contract, fell 90 cents to $47.48 US a barrel.

At the centre of the selloff were shares of technology companies including chipmakers, manufacturing giants and retailers that are exposed to China.

The “FAANG” group of stocks — Facebook, Amazon.com, Apple, Netflix and Google parent Alphabet — fell between 1.7 per cent and five per cent because of their exposure to the Chinese market.

“This just got messier and more expensive to the global economy and until we get break here, markets are going to be under pressure,” said Art Hogan, chief market strategist at National Securities in New York.

“Every increase in tariffs is a drag to the global economy and if it drags the economy down, it will drag earnings down, so stocks are going to react to that.”

Inversion in the yield curve

Canadian government bond prices were higher and the spread between the yields on the 10-year bond and the three-month T-bill briefly inverted.

The trade tensions also affected  the yield curve between three-month U.S. Treasury bills and 10-year notes, resulting in an inversion for the second time in less than a week on Monday. One Chinese daily newspaper had suggested China might sell off its vast holdings of U.S. Treasuries.

An inversion in the yield curve is seen as a classic signal that a recession is coming. It also makes banks’ lending less profitable.

Shares of Uber Technologies Inc fell 10 per cent, extending losses from Friday’s 7.6 per cent fall in its first day of trading as a public company.