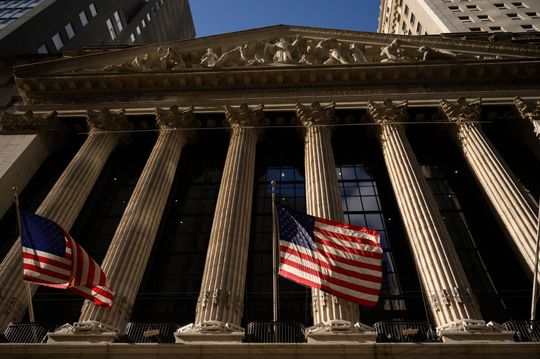 U.S. stocks came back under pressure as the Federal Reserve kicked off a two-day policy meeting and investors sifted through a mixed bag of corporate earnings.

What did stock indexes do?

U.S. stocks dropped in volatile trade as investors sought to cope with rising inflation, anxiety over the Federal Reserve’s expected policy changes, fears of a Russian invasion of Ukraine and the ongoing COVID-19 pandemic.

“Investors are just continuing to digest this idea that Federal Reserve policy is likely to be tighter than what was expected at the end of last year” as it responds to “inflation pressures,” said Anthony Saglimbene, global market strategist at Ameriprise Financial, in a phone interview Tuesday. “Riskier areas of the market have kind of reset to the idea that we’re just not going to have the type of liquidity that we’ve had in the market over the last 18 months.”

The Nasdaq Composite last week entered correction territory as it fell more than 10% from its all-time high in November. The index, which is heavy on interest rate-sensitive growth stocks, was battered as Treasury yields rose sharply to begin the year as investors ramped up expectations for Federal Reserve rate increases.

The decline in stock prices is a “healthy development in the market,” as it takes away some of the “froth” that has accumulated over the last several months, said Saglimbene. He suggested that investors may want to draw up their “shopping lists” for high-quality companies in technology and “cyclical companies that are still benefiting from the reopening trade.”

Financials are “a good place to be as they actually benefit from rising rates,” Saglimbene said, while also suggesting that investors look across the S&P 500 index for high-quality stocks that have sold off “significantly.”

The Fed Funds futures are pricing in a high probability of a rate hike by the central bank in March to combat high inflation, according to Saglimbene.

“Markets are now in no doubt that policy makers need to act quickly to get a grip on inflation,” said Raffi Boyadjian, lead investment analyst at XM, in a note. “But there are worries that the Fed has fallen so behind the curve, it won’t be possible to bring inflation back under control without choking off growth.”

The central bank began a two-day policy meeting Tuesday, with investors expecting to see officials lay the groundwork for a rate increase in March. The meeting will be closely watched for clues to the pace of further hikes, as well as how soon and quickly the Fed will begin winding down its balance sheet.

“We don’t believe we’re knocking on the door of a recession,” said Emily Roland, co-chief investment strategist at John Hancock Investment Management, in a phone interview Tuesday. But “we do see a potential air pocket in economic growth in the first quarter” as a result of  the omicron variant of the coronavirus, she said.

A survey of consumer confidence fell 1.4 points in January to 113.8, indicating that omicron and high inflation weighed on the minds of Americans early in the new year. Economists polled by The Wall Street Journal had forecast the index to shrink to 111.7 from a revised 115.2 in December.

“We are not calling a bottom to the market but, with the broad market index down a bit over 10%, it is time to begin nibbling at some of the more beaten down areas of the market,” he wrote. “This window of opportunity could stretch until the March 25 rate hike, but that does not mean value has not already been created in the most distressed areas of the market.”