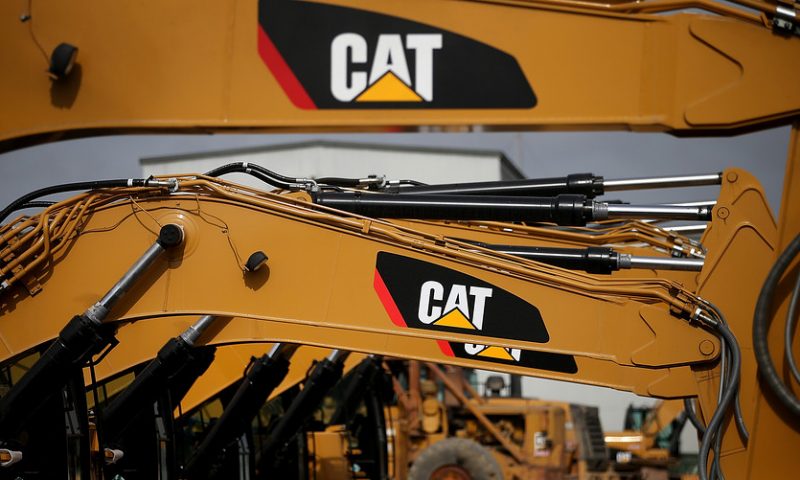 After the market closes Wednesday, Microsoft, Ford Motor, Tesla and EBay are due to report

Stocks edged higher Wednesday morning despite a weaker-than-expected report from two Dow components and a poor update from a semiconductor company, with a fresh wave of corporate results on deck after the market close.

Wall Street is also watching developments pegged to Brexit, as a vote for a fast-track exit for Britain from the EU was rejected by parliament on Tuesday, but the delay eases concerns about the U.K. crashing out of the bloc without a deal on Oct. 31.

How are major indexes faring?

Results from Caterpillar Inc. CAT, -0.50% and Boeing Co. BA, +1.92% initially knocked the market lower in pre-market action on Wednesday, with investors already unsettled from Brexit developments and weakness among semiconductor companies, but stocks turned higher in early trading as investors took positives away from quarterly results from the blue-chip components.

That came amid a slide for the semiconductor sector following a poor forecast from Texas Instruments Inc. TXN, -6.68% that was much worse than expected in a late-Tuesday earnings report, with a new revenue estimate range that fell as much as a half-billion dollars below Wall Street’s consensus forecast. That helped drag the PHLX Semiconductor Index SOX, -1.60%   down more than 2%.

Overall, however, earnings from American companies have been better than feared, albeit off lowered expectations. Thus far, of the 98 companies that have reported third-quarter results in the S&P 500, 82.7% have delivered results above analyst expectations, while 12.2% reported below analyst expectations, according to research provider Refinitiv. By comparison, 65% tend to “beat” estimates, and 20% fall below consensus estimates, according to Refinitiv data going back to 1994.

Meanwhile, Parliament’s rejection of Prime Minister Boris Johnson’s legislative schedule for Brexit reduced the likelihood of a departure by Oct. 31 or a no-deal exit from the EU. The U.K. government has already asked for an extension to the end of January 2020, and European Council President Donald Tusk said on Twitter that he would recommend that request is granted.

In a light day for U.S. economic data, the Federal Housing Finance Agency’s house price index for August was 0.2% higher for the month, bringing annual price gains to 4.6%.

For investors, this week is all about earnings, even with a Federal Reserve meeting set to kick off in less than a week, said Randy Frederick, vice president of trading and derivatives at the Schwab Center for Financial Research. Companies are saying, “How we did this quarter isn’t as important as what we expect the future to hold,” Frederick noted.

For example, Boeing earnings also missed estimates and deliveries of new planes fell short, but revenues beat forecasts and the manufacturer said it expects the beleaguered 737 MAX to return to service in the fourth quarter.

“Investors have been more concerned about slowing growth, which is reasonable, but I think there’s been an overdose of pessimism about how resilient consumers are,” said Kate Warne, principal investment strategist with Edward Jones. She pointed out that third quarter earnings have a tough year-over-year comparison, since last year corporations got a boost from the late-2017 tax cuts. From that perspective, results that are slightly better than expected is solid, the strategist said.

“In an environment of job growth, ultra-low interest rates and central-bank stimulus, this is actually an okay environment and one in which you need to be putting money into stocks because they can continue to go higher,” she said.

Texas Instruments TXN, -6.68%  shares tumbled nearly 7% after it reported earnings per share of $1.40, excluding certain items, versus the $1.42 analyst consensus and gave a forecast that was much worse than expected late Tuesday.

Nike Inc. NKE, -2.46%  shares were down 2.3% after the sports apparel company late Tuesday reported that longtime CEO Mark Parker was stepping down, effective January of next year. He will be replaced by John Donahoe.

Shares of Facebook Inc. FB, +1.61%  will be in focus as CEO Mark Zuckerberg will testify on the social-media giant’s effort to launch controversial digital-currency platform Libra. Facebook’s stock was up 0.9%.

Hilton Worldwide Holdings Inc. HLT, +1.77% revised its financial targets for the year on Wednesday. The McLean, Va.-based company said it now expects systemwide revenue per available room, or RevPAR, to increase about 1% on a currency neutral basis compared with 2018. The company had previously forecast an increase between 1% and 2%. Shares jumped 2% higher on Wednesday.

Chipotle Mexican Grill Inc. shares CMG, -5.66% were down nearly 5% after the fast-Mexican company on Tuesday reported third-quarter net income of $98.6 million, or $3.47 a share, compared with $38.2 million, or $1.36 a share, in the year-ago period. Adjusted for items such as restaurant asset impairment expense and restructuring, among other things, earnings were $3.82 a share.

How are other markets performing?

The 10-year Treasury note yield TMUBMUSD10Y, -0.99%  fell to 1.738% on Wednesday from 1.768% late Tuesday in New York. The mixed corporate outlook has investors favoring bonds as they wait out the results still due this week. In Europe, eyes are on Brussels, where an EU agreement to delay Brexit may lead to U.K. Prime Minister Boris Johnson seeking an early election.

Oil futures turned higher on Wednesday after a U.S. government report showed a decline in U.S. crude supplies for the first time in six weeks. December WTI crude CLZ19, +1.08%  , on its first full session as a front-month contract, rose 54 cents, or 1%, at $55.02 a barrel on the New York Mercantile Exchange. Prices were likely to mark their highest settlement so far this month.

Gold prices enjoyed a fillip from haven buying on Wednesday as a retreat in assets considered risky, amid political uncertainties like Brexit, underpinned gains in the yellow metal. Gold gained for a second day. Gold for December delivery on Comex GCZ19, +0.58%  gained $9.20, or 0.6%, to trade at $1,497.00 an ounce, after trading little changed on Tuesday.