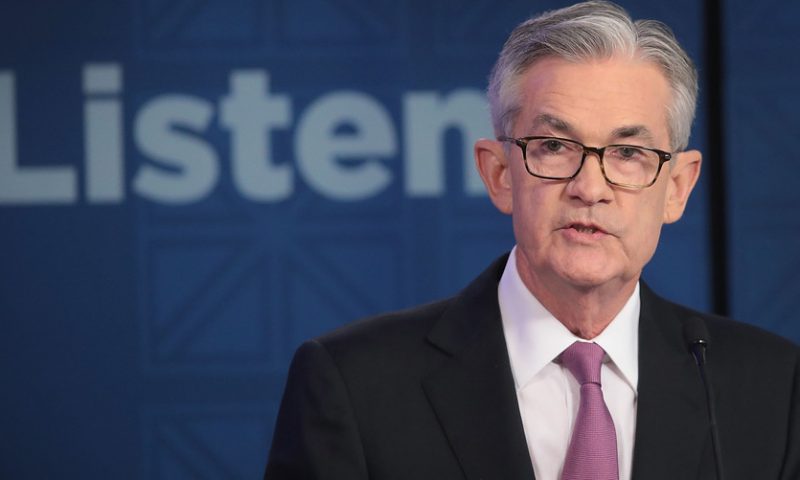 Stocks closed sharply higher Tuesday, notching their best one-day percentage gains since January, after remarks by Federal Reserve Chairman Jerome Powell were seen by some investors as opening the door to a possible rate cut.

Support was also tied to renewed hopes tensions between the U.S. and its major trading partners would die down. Key indexes bounced back from a loss a day earlier that saw the tech-heavy Nasdaq Composite fall into correction territory on fears of heightened regulatory scrutiny of key companies.

How did stock benchmarks fare?

Stocks extended gains after Powell told a monetary policy conference that the central bank was monitoring the economic outlook in the face of escalating trade tensions and other factors. The Fed would “act as appropriate” to sustain the economic expansion, Powell said.

Analysts also pointed to remarks by China’s Commerce Ministry, which said “differences and frictions” should be resolved through talks, according to news reports.

The Nasdaq’s Monday decline was widely blamed on heightened threats that U.S. regulators may reduce the size of tech and social-media companies like Facebook Inc. FB, +2.04% and Google-parent Alphabet Inc. GOOG, +1.62%GOOGL, +1.52%  for potential violations of antitrust regulations.

Increased scrutiny directed at some of the key members of the so-called FAANG stocks, which also include Netflix Inc. NFLX, +4.98% and Amazon.com Inc.AMZN, +2.18% comes amid growing worries about slowing economic growth inside and outside the U.S.

Shares of Uber Technologies Inc. UBER, +3.64%  were in focus, as Tuesday marks the end of a “quiet period” during which investment banks that underwrote the ride-hailing company’s May 10 initial public offering were unable to comment on the company. Shares erased an early decline to rise 3.6%.

Analysts from SunTrust, BTIG and William Blair and others initiated coverage of the stock with buy or outperform recommendations.

Shares of Ventas Inc. VTR, -3.04% fell 2.7%, after the senior housing and health-care properties company said Monday that it was issuing 11 million new shares to the public at $62.75 per share. The stock closed at $64.15 Monday.

Shares of CVS Health Corp. CVS, +2.30%  were in focus after the company said it expects its merger with health insurer Aetna will result in more than $300 million in synergies in 2019 and $800 million in 2020. The company said it would outline a series of measures at an investor day later Tuesday aimed at accelerating growth. The stock rose 2.3%.

What did strategists say?

“The potential that the Fed could step in and maybe cut rates is a definite comfort to markets and investors,” Kayrn Cavanaugh, senior market strategist at Voya Investment Management told MarketWatch. “The market had also gotten oversold in the past couple of days,” she added. “So a lack of bad news on trade, along with the Fed saying its ready to step in to save the economy if needed, was enough for the market to rally.”

“The fact that [the] trading relationship between the U.S. and China hasn’t gotten any worse in the past day has lifted investor confidence a little,” said David Madden, market analyst at CMC, in a note. “Mr. Powell said he will ‘act as appropriate’ to sustain economic growth, and dealers viewed that as a sign that we would consider cutting rates should he feel it was required.”