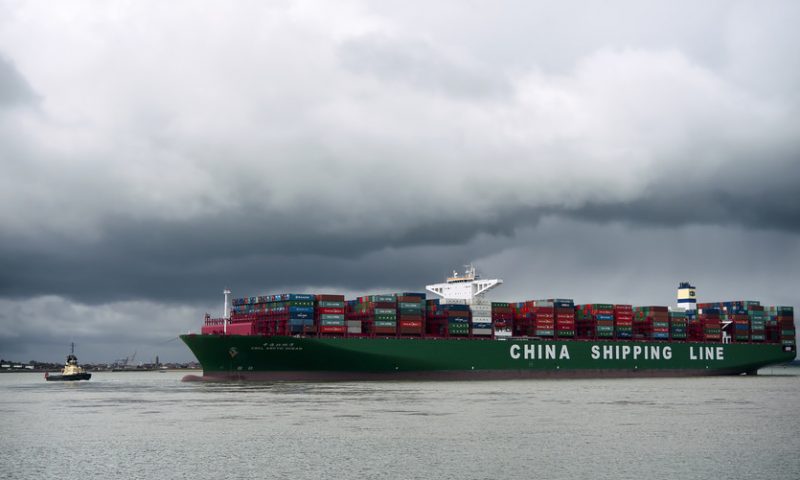 U.S. stocks fell Tuesday after a series of headlines raised doubts that U.S.-China trade talks set to begin Thursday will be successful.

The Trump administration’s latest moves against China offset comments made by Federal Reserve Chairman Jerome Powell, who said a speech Tuesday afternoon that the central bank will soon begin expanding its balance sheet through purchases of short-term U.S. government debt.

Wall Street’s remained focused on the resumption of trade talks in Washington D.C. between the U.S. and China with import tariffs set for $250 billion worth of Chinese goods at a rate of 30% from Oct. 15.

Late Monday, the U.S. blacklisted 28 Chinese companies, including artificial intelligence frims, because of their alleged role in human-rights violations against the Uighur Muslim minority ahead of the high-level discussions to be led by China Vice Premier Liu He on Thursday.

Bloomberg also reported the Trump administration is moving ahead with discussions around possible restrictions on capital flows into China, with a particular focus on investments made by U.S. government pension funds.

Meanwhile, the Chinese lowered expectations for a breakthrough this week, with the South China Morning Post reporting that Liu He will not represent his government as a “special envoy” during this weeks and that the delegation will cut its stay short. The Chinese will leave the United States on Oct. 11 rather than Oct. 12, according to the report.

“It was an ugly day for those seeking peaceful resolutions to . . . the US-China trade war,” wrote Connor Campbell, financial analyst at Spreadex, wrote in a note, adding that the move to expand the blacklist “is another cranking up of tensions between the two superpowers when all investors want to hear are sweet nothings and conciliatory promises.”

Stocks traded lower as negative headlines on trade piled up, but pared those losses Tuesday afternoon following a speech by Federal Reserve Chairman Jerome who said the central bank believes the current economic expansion can be sustained, and that the Fed intends to expand its balance sheet by purchasing short-term U.S. government debt in exchange for bank reserves, in an attempt to quell recent stress in the market for overnight bank-to-bank lending.

Powell said this move “should in no way be confused” with the large-scale asset purchases program, known as quantitative easing, which was aimed at lowering long-term interest rates, but investors appeared to see it as supportive of equity prices nonetheless.

“This is very QE-like,” Mike O’Rourke, chief market strategist at JonesTrading told MarketWatch. “You’re not getting the full effect of the bank buying 10-year treasures, but you’re still expanding the balance sheet and putting liquidity into the system.”

As Powell spoke, sentiment was again dampened by trade-related headlines, after reports that the Trump Administration would impose visa bans on Chinese officials involved in the mass detention of Muslims in the Chinese region of Xinjiang.

“The headline about visa restrictions took the air out of the Fed rally,” O’Rourke said. “There have been a lot of negative trade headlines, and there hasn’t been a positive one in a while.”

Domino’s Pizza Inc. DPZ, +4.65% rose 4.6% Tuesday, recovering from early losses after the company cut its outlook for the next three years but rallied after CEO Ritch Allison explained the move in a call with analysts and CFO Jeff Lawrence announced a $1 billion buyback program.

Boeing Co. BA, -0.65% was sued by the union representing pilots at Southwest Airlines. The pilots claim Boeing rushed the now-grounded 737 Max jet to market and misrepresented the aircraft as safe. Boeing said the suit is without merit. Shares fell 0.7% Tuesday.

Oracle Co. ORCL, -1.37% stock fell 1.4% after the company announced its planning to hire 2,000 new workers as part of a plan to expand cloud computing services to more companies in the competition with Amazon Web Services and Microsoft.

Gold prices gave up earlier gains on Tuesday to finish lower for a third consecutive session, pressured by strength in the dollar, a day ahead of the release of minutes from last month’s Federal Reserve meeting. Gold for December delivery GCZ19, +0.19% fell 50 cents to trade at $1,503.90 an ounce on Comex after settling at $1,504.40 on Monday.

Oil futures headed lower Tuesday as traders kept tabs on developments ahead of U.S.-China trade talks due later this week, which could shape expectations around demand for crude. West Texas Intermediate crude for November delivery CLX19, +1.01% fell 12 cents to end at $52.62 a barrel on the New York Mercantile Exchange.

US Job Openings Slip 1.7% in August as Labor Market Slows