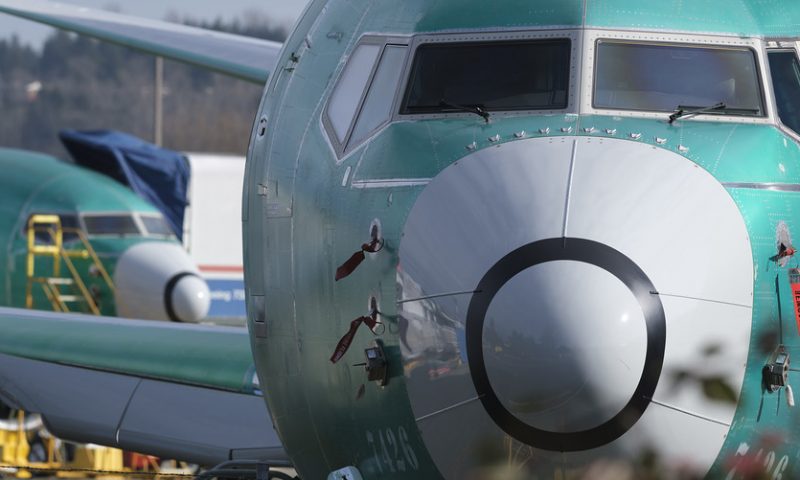 The blue-chip Dow ended positive on Monday to maintain its record-breaking ascent after Boeing said its grounded 737 Max fleet could see a return to service early next year, helping to offset trade war concerns that had left other U.S. stock-market benchmarks with losses.

A surge in Boeing Inc. BA, +4.55% shares pulled the blue-chip Dow away from its lows after the world’s biggest aircraft maker said it expected the troubled 737 Max fleet to return to commercial service in January, and that it expected to resume shipments of those carriers as early as December. The company has come under pressure for months since its 737 Max aircraft was grounded following two high-profile crashes, which investigators linked to flight software systems.

Investors also eyed a comment made by President Donald Trump over the weekend. He said that discussions with China and the U.S. were going “very nicely,” but cautioned that recent reports about an agreement to roll back tariffs, as a part of a preliminary trade resolution, weren’t accurate. “The level of tariff lift is incorrect,” Trump said on Saturday at the Joint Base Andrews before leaving for a visit to Tuscaloosa, Ala., Reuters reported. He didn’t elaborate on those comments.

Trump also suggested that the pace of talks were going more slowly than he would prefer and that China had more to benefit from striking a tariff resolution soon.

“The trade talks with China are moving along, I think, very nicely and if we make the deal that we want it will be a great deal and if it’s not a great deal, I won’t make it,” the President said.

“Stocks hit fresh new highs last week on a familiar theme: positive chatter/headlines on phase one of a U.S./China trade deal, while earnings and global data have been better than feared,” wrote Tom Essaye, president of the Sevens Report, in a Monday note to clients.

These hopes were “somewhat downplayed by President Trump on Friday and more forcefully over the weekend, but at the same time he did acknowledge it was being considered, so it’s something we have to watch for,” Essaye added. “While that’s clearly a potential positive, it’s also adding to a lot of positive expectations that are already priced into the S&P 500 at 3,100.”

Investors also were watching reports of clashes in Hong Kong as a monthslong protest flared up again. The Wall Street Journal reported that police shot and critically injured a protester as the city’s start-of-week commute was disrupted by demonstrators trying to block roads and delay trains. The paper also said one man was seen set ablaze in one unverified video, after he confronted protesters who had been vandalizing a subway station.

There was no economic data released on Monday, though investors were parsing a speech from Boston Fed President Eric Rosengren, who argued Monday that regulators around the world should be increasing capital buffers for large banks.

Looking ahead, Trump will speak at the Economic Club of New York on trade Tuesday, and Fed Chairman Powell is scheduled to appear on Wednesday before the Congressional Joint Economic Committee and then in front of the House Budget Committee, a day after.

Shares of General Electric Co. GE, -1.48% ended lower by 1.5% after the industrial conglomerate closed at a better-than one-year high on Friday. The company’s stock had risen about 27% since the Oct. 30 release of third-quarter earnings, through Friday’s close.

Tupperware Brands Corp. TUP, -1.18% suspended its dividend late Friday, sending shares in the company down 1.2% Monday.
Shares of Apple Inc. AAPL, +0.79% and Goldman Sachs Group GS, -1.74% were 0.7% higher and 1.8% lower, respectively, after The New York Department of Financial Services said its opening a probe into the new Apple Card after a series of tweets from a technology entrepreneur David Heinemeier Hansson accused it of gender discrimination.

West Texas Intermediate crude for December delivery CLZ19, +0.19% was down 0.7%, or 38 cents, to $56.86a barrel on the New York Mercantile Exchange, after a weekly gain of 1.9% during the five sessions ended Friday.